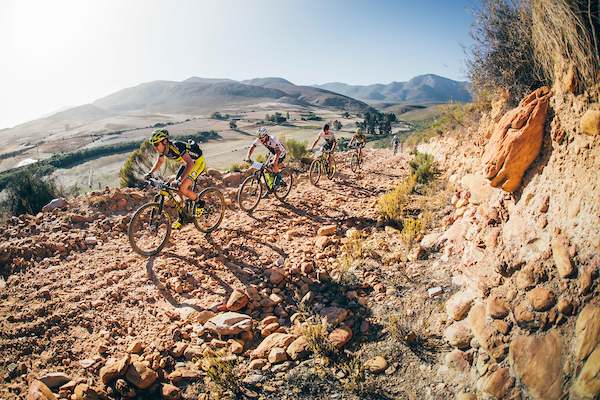 Swiss mountain bike racing legend, Christoph Sauser didn’t only mark his return from retirement at the Fairview Attakwas Extreme MTB Challenge in South Africa on Saturday, he won the gruelling 121km race after the most incredible comeback following a mechanical delay early on.

Sauser cut his rear tyre badly at the 27km mark and lost the lead group while repairing it. He was over five minutes behind the lead group at the 30km mark but was committed to limiting the damage as best he could, pedalling powerfully up the steep climbs and aero-tucking on every fast descent. He didn’t only limit the damage though, he undid it, steadily moving through the field and eventually catching leaders Hynek and Platt with 22km remaining.

A clearly spent Platt capitulated on the final long climb where Sauser made the catch and resigned himself to riding for third place, leaving Hynek and Sauser to wage a two-way battle for the title. Sauser’s knowledge of the course, which has a tricky, fast descent to the finish straight, was in his favour, but in doubt was how much he had left after his phenomenal effort to close a more than five-minute gap.

“I felt very good from the start. But unfortunately I double-flatted and it took four or five minutes to fix it because I ran out of CO2 Bombs and had to pump it. I decided not to change wheels when I got to the tech zone. The spare wheels I had there were quite heavy and I felt too risky for a one-day race, so I just kept going, with the small bit of hope of catching up to fight for the podium,” explained Sauser afterwards.

“And yep, the guys came closer and closer until I could see them. That was motivating. The finish suits me because it’s technical. It helped that I know the finish. The sprint for the finish is always the most exciting part of the five hours of racing,” smiled the champion.

“Christoph had an impressive ride today. He knew the finish which was a big advantage for him at the end. I’m happy with my second place though. It was a great race and great preparation for the Cape Epic,” said Hynek.

Erik Kleinhans (Topeak Ergon), riding solo for most of the second half of the race, kept his pace steady to finish fourth and the first South African, with HB Kruger (Telkom BCX) rounding out the top five.

For full results and other race information, visit www.atta.co.za.