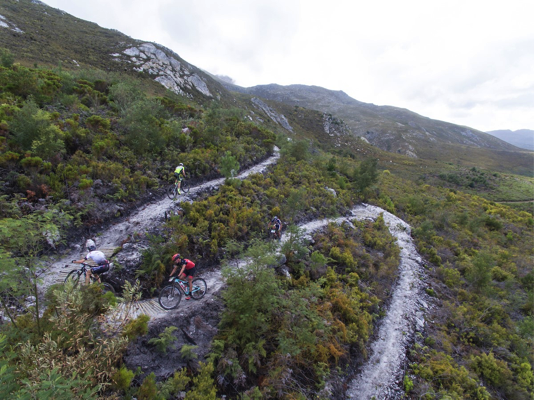 The elite men on the final climb as they approach the last 13km of the route. Lead by Matthys Beukes and followed closely by Christoph Sauser, Alan Hatherly and Max Knox Photo Credit: www.zcmc.co.za

Swiss mountain bike racing legend, Christoph Sauser, continued his strong comeback from retirement with another victory when he outsprinted South African champion, Max Knox, to claim the title at the opening round of the Ashburton Investments National Mountain Bike Series in Grabouw, South Africa on Saturday.

While men’s race was a close contest, the women’s race wasn’t and current XCO World Champion, Annika Langvad of Denmark, secured a dominant win in the 73km race through the Grabouw Valley in the Western Cape province.

The men’s race started fast with Matthys Beukes (Pyga/Euro Steel), back from a long injury layoff, setting a rapid pace through the blackened wilderness area that was ravaged by recent fires. With a relatively short 73km distance to cover, there was no relenting and sections of challenging singletrack ensured the lead group was quickly whittled down to just 12 by 28km.

On the lower slopes approaching the main climb the 12-rider group splintered, with Rio Olympian Alan Hatherly (Team Spur) and Beukes riding clear of Sauser (Investec-Songo-Specialized) and Knox (New Holland/This Way Out) over the summit. Hatherly snapped up the King of the Mountain prize and when the pair sat up to recover, they were joined by Sauser and Knox.

The quartet began to increase their lead over the field in the second half of the race and on the final climb with, just 8km remaining, Beukes attacked the group, getting a small lead. But he took a wrong turn and found himself having to retrace his way through a cloud of frustration back to the race route. Hatherly found the pace a little too much and dropped off near the finish with Sauser and Knox forging clear to battle out a sprint finish. Sauser was the stronger in the dash and crossed the line first in 03 hours 04 minutes 08 seconds.

“It was so different compared to last weekend at Attakwas! I also wasn’t so fresh and I had a hard time from the start, especially my legs. I was more or less on the limit the whole race,” said a relieved Sauser.

“But I have a strong mind and just tried to hang on. I was dropped over the KOM and took the risk of not getting another bottle there. So I was basically riding with one small bottle for a three-hour race. I often forget about that stuff and just keep on going,” added the former multiple world champion.

“I think the other guys began to slow down a bit and at the end I started to feel better. At the end it was just Max and I. Luckily, before the race I went quickly to check out the last 500m and I knew how to place myself and where to attack for the sprint. It was a balanced route with good conditions and it feels good to have won,” added Sauser.

“The race was quite a big shock to the system! But that is normal for the first one of the year. I think Christoph was on the limit a lot and he used his experience to hang in. At the finish he sprinted and I crawled! Still lots of time to fine-tune my form though for the Cape Epic,” said Knox.

“I’m really happy with my result. I had a big week and the plan was to use this race for training. It worked out quite well. I had good legs. The pace was really hard – more cross-country style racing, which really suited me,” said Hatherly.

“I had a strong race. It’s feel really good to be back racing at the front again after being out for over four months. Unfortunately I followed a wrong arrow and it was game over for me. Max, Alan and Christoph were closing on me at that stage, so I can’t say I would have won, but I got a lot of positives from the race and the season has only just started,” said Beukes.

Two of the event’s pre-race favourites, Germany’s Karl Platt (Bulls) and Czech Republic’s Kristian Hynek (Topeak-Ergon) were unable to take to the start line due to stomach illness.

In the women’s race, Langvad made sure she got into the early singletrack sections first, putting all her rivals under pressure. Matching her early on were Candice Lill (dormakaba) and Alessandra Keller (Radon Factory Racing). Swedish marathon champion, Jennie Stenerhag (CBC/Abro) and South African marathon champion, Robyn de Groot (Ascendis Health), were in the early mix too, but De Groot dropped off the pace in the second section of singletrack.

Langvad led over the top of the biggest climb of the day to secure the Queen of the Mountain prize, five seconds ahead of Lill and Stenerhag. But from there on the former three-time marathon world champion began to stretch her lead, eventually crossing the finish line first in a time of 03 hours 27 minutes 19 seconds.

Lill began to falter and faded towards the end, while Stenerhag took a wrong turn, while lying in third place. De Groot steadily reeled her rivals in and finished second, just under six minutes after Langvad. Esther Süss (Meerendal) had also had a steady second half and pulled her way into third place, a further six minutes behind De Groot.

“I wasn’t sure about doing the race as I was a bit ill, but I took a very easy week and felt recovered enough to race. I really wanted to do this race for the experience of the superb trails and I wasn’t disappointed. I really enjoyed the trails even though I didn’t feel like I was flying towards the end of the race, when tiredness really started to kick in,” said Langvad.

“At the beginning of the race it was the two young guns Alessandra Keller and Candice Lill who stuck with me, so I was very impressed when I saw Robyn de Groot crossing the line in second. Kudos to her. It’s obvious how much she’s improved recently!” added Langvad.

“I was badly positioned going into the second section of singletrack, which was fairly early in the race. Annika attacked going into the singletrack with Candice on her wheel and when the elastic snapped through the rugged singletrack I found myself in fifth place with some big gaps, having to work my way up the field again,” said De Groot.

“Unfortunately I never gained enough to make contact with Annika again. She rode a classy race and that was a really well deserved victory. It’s been awesome competing against her the last two weeks,” smiled De Groot.

“I’m really happy with third place. I had to fight the whole way and managed to pull up nicely in the last part. There were many good riders here, which is good for women’s racing,” said Süss.

“It was a tough race – both the competition and the route. I didn’t pace myself correctly and was fiercely reminded of the demands of a marathon in the last 15km,” said Lill, a former XCO Junior World Championships bronze medallist.

“The route was such fun. I love the rough trails in Grabouw and I feel the race route incorporated all the best bits with some new twists. There was a good combination of climbs, open district roads and challenging singletrack. I also like that we had a separate Elite women’s start as it lets the racing unfold from our hands and not the hands of the men we are racing with. It’s more fair and interesting too. I’m already looking forward to the next one,” added Lill.

The Ashburton Investments National MTB Series now moves to South Africa’s Mpumalanga province for Round 2 on 18 and 19 February. It will be the first of the new two-day stage-race format. For more information or to enter, visit www.nationalmtbseries.com

For full results of Round 1 at Grabouw, visit: www.saseeding.co.za