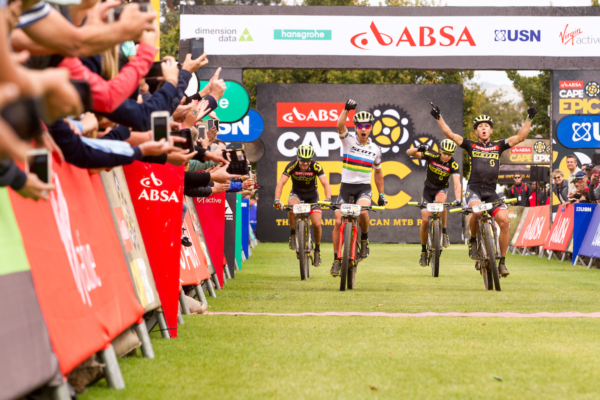 Thanks to another strong ride they also moved into the overall race lead after the 84km Stage 5.

Third went to Christoph Sauser and Jaroslav Kulhavy (Investec-Songo-Specialized) who had dropped back to nearly two minutes behind Schurter and Stirnemann at one stage but fought magnificently to finish 17 seconds behind on the day.

After five superb days, it was eventually a mediocre day for Manuel Fumic and Henrique Avancini (Cannondale Factory Racing XC). They’ve held the yellow zebra jersey since Sunday’s Prologue, but a puncture and bad day on the bike for Avancini handed the overall race lead to Schurter and Stirneman. Thanks to a ninth-place finish on the day, Fumic and Avancini have dropped to third overall, while Sauser and Kulhavy lurk in second, just 50 seconds off the front in the overall race.

On another fast day, SCOTT-SRAM MTB Racing had to dig deep for the stage win, as Sauser (who was feeling off his game for the first half of the stage) and Kulhavy chased to the bitter end.

Stirnemann was left breathless after crossing the line, and had to take a few minutes to compose himself before talking to the media.

“The stage win feels great, especially after the start I had,” said Stirnemann. “In the beginning I was really struggling for rhythm. It took me quite a while to get started, but I think after the first climb of the day I started feeling much better. It was fast again from the start. In fact the whole stage was hard going…” After trailing off, he asked the waiting media to excuse him while he took time to recover.

Schurter on the other hand looked ready for another 84km. “It’s absolutely amazing to win the stage,” he said. “On the first big climb of the day I noticed that Christoph was struggling; that’s when we decided to go for it. Both the SCOTT teams were feeling good, so it’s great that we have now taken two stages for the team.”

After moving into yellow, Schurter expects an exciting finish to the Absa Cape Epic. “The yellow zebra jersey is obviously a bonus,” he said. “The cross-country guys have really been doing well at the Absa Cape Epic this year; we’re happy to continue the form. Tomorrow though; anything can happen. We look forward to it.”

Earlier in the day the pace was set by the all-South African pair of Matthys Beukes and Philip Buys (PYGA Euro Steel). Eager for a stage win, Beukes and Buys bolted out of the start chute, setting a high tempo from the word go. Unfortunately they suffered a torn sidewall, which put paid to their stage chances. Sauser meanwhile was struggling with an ailment and made an effort to conserve his energy.

“I felt horrible at the start,” said the five-time champion. “I felt slightly ill, had no rhythm and just couldn’t get going. It was suffering, but it was suffering of the highest level. The pace was fast and we just had to hang in. I always know what I don’t have at the start of the ride, I will have at the end of the ride, so I knew I just had to hang in there and everything would come right.”

With the SCOTT teams slowing slightly after their efforts today and yesterday, Sauser and Kulhavy were able to chase them down, though Sauser admits their tactics were slightly off. “Strategy-wise, I think we were actually too conservative on the day. We went a bit slowly on the trails, and in retrospect I should have lead Jaro through the trails because I know them so well. That was my only complaint for the day. Finishing strongly though definitely puts me in a better headspace for tonight and tomorrow.”

Stage 6 of the 2017 Absa Cape Epic is billed as the Queen Stage – the toughest of all seven. It features the daunting Groenlandberg climb and a number of vicious up and downs – perhaps a day for the marathon experts to exert some control.

“I wouldn’t say we are favourites,” says Sauser. “Everyone has shown that they are so strong this week; and the terrain is super rough out there. The potential for mechanicals is very high. Tomorrow is another wait and see day.”

Meanwhile, the 2017 pacesetter is sanguine about the remainder of the race. “We had some bad luck today, and my friend also struggled,” said Manuel Fumic. “But we made it, we kept fighting. That happens at these events. We are not disappointed at all; our performance has been amazing and we are very happy. Now, you know, there is no yellow jersey on us, so maybe tomorrow we have some fun. Now we party on the trails.”