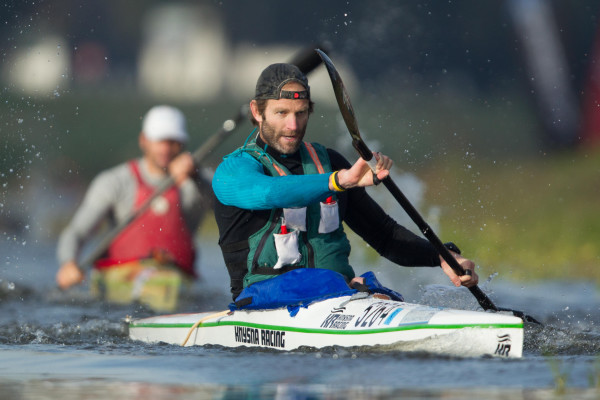 Knysna Racing/Bamboo Warehouse’s Graeme Solomon is one of the country’s top elite men to have sent his entry into this year’s Berg River Canoe Marathon that takes place from 15-18 July across organisers’ desks ahead of the looming close of normal entries. John Hishin/Gameplan Media

Paarl – With just hours left before the close of normal entries for this year’s Berg River Canoe Marathon, veteran paddling ace and former race winner Graeme Solomon has confirmed his participation in the 54th edition of the 240km ultra-marathon from Paarl to Velddrif that takes place from 15-18 July.

“It will be business as usual for me,” laughs the relaxed Knysna Racing/Bamboo Warehouse competitor. “Just as I do every time I paddle, I’ll look to go out there and try win again this year.”

“Unfortunately, as always, my effort will be somewhat water level dependent but I’ll definitely be there again and I’m really looking forward to seeing how this year’s race unfolds!” he adds excitedly.

Despite having shown some good form of his own of late, much of Solomon’s pre-race chatter surrounds the name that is still conspicuous by its absence from this year’s Berg entry list.

“I really hope Hank (McGregor) does decide to come down and race this year because if he does then we could well see one of the most competitive and exciting Berg title races in quite some time and this year’s Berg could be one of the toughest titles to win!” says Solomon.

“Hank going for a record tenth Berg win, Andy (Birkett) having beaten Hank at SA Marathon Champs a few weeks ago and keen to defend his title as he starts a Berg run of his own; there would be everything to play for!

“It is would be such an interesting prospect and just so exciting that it would all unfold at the Berg – Western Province’s premier canoeing race.

“At this stage it’s all still a question of whose actually going to be there though!”

On top of excitedly taking a seat in one of the most sought after vantage points from which to observe the McGregor versus Birkett duel unfold –alongside them – Solomon also believes the pair’s much anticipated rivalry may produce a positive spin-off for his own race too.

“If Hank does decide to race then it could be quite nice for my race prospects too as all of sudden instead of watching just one other paddler, whoever is up front will have to keep an eye on two or three, which can be quite tricky on the Berg!”

Yet another Berg second place finish at last year’s clash – where he finished just fifteen seconds behind Birkett after four days of racing – and back to back pre-Berg race victories at the recent Gouda to Bridgetown and Hermon to Gouda clashes will give Solomon good confidence heading into his final preparation phase.

The drought that has gripped much of the country and resultant low water levels do however concern the unshakable challenger while the possible water hyacinth blockages pose another problem.

“The water level is dropping by the day and given how dry it has been and the state of our dams, I highly doubt we’ll get a water release which will make things pretty tough for sure.

“There’s a bit of speculation about the hyacinth at this stage but we should know a bit more after this weekend’s Wellington to Hermon race which is meant to take place over a large stretch of the affected area.

“I’m sure the organisers have a few contingency plans in mind should they be needed.”