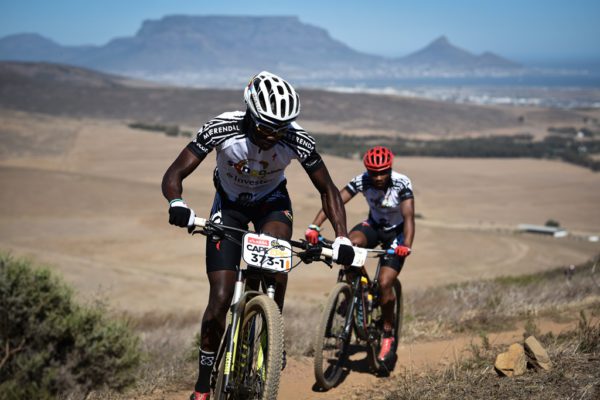 Thando Klaas leads teammate Lorenzo Leroux up a climb during the Prologue of the 2017 Absa Cape Epic. Photo by Sportograf.

The dust has well and truly settled on the Absa Cape Epic of 2017 and for the elite riders the mountain biking season has moved on with new challenges already firmly in sight. For the young riders from the songo.info programme the race was their main focus on their bikes for the year, but while it was a massive learning experience it was by no means the biggest challenge they will face this year. But hopefully the trials they endured and overcame during the Epic will give them the confidence to overcome the obstacles they will surely face off their bikes.

For the 2017 Absa Cape Epic the songo.info programme was recognised as one of the official development charities. 2017 was the first year of this initiative, which will run for the 2018 and 2019 races too, and the Absa Cape Epic graciously provided three development organisations – the Diepsloot Mountain Bike Academy, the Change a Life Academy and songo.info – with two team entries each, to strengthen the competition in the Exxaro Development Category. Taking up those entries were the Songo-Investec 1 team of Thando Klaas and Lorenzo Leroux and the Songo-Investec 2 team of Theo Ngubane and Lwazi Ntshakaza. Klaas and Leroux had a relatively successful Epic, racing to fourth place in the Exxaro Development Category – but having held the final podium position in the class for most of the week losing out on it on the final day left them felling bittersweet about the racing experience.

Ngubane and Ntshakaza meanwhile were not as successful on the time sheets but they had very different aims heading into the race. Reflecting on his Absa Cape Epic experience Ngubane said that going into the race he “was very excited and nervous, and happy to have had the opportunity to ride it. [But] since it was my first epic I really just wanted to finish it and learn how to ride it.” 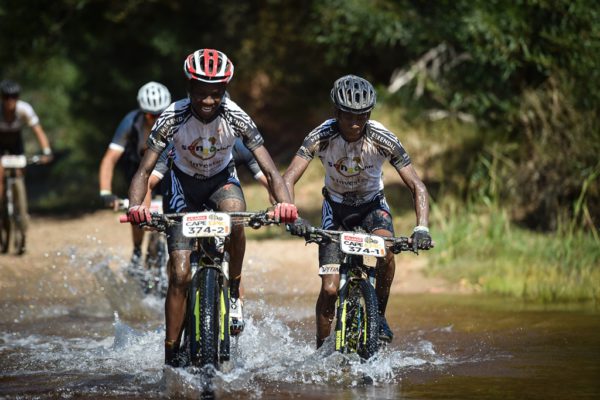 The four young riders spent most of their pre-Epic training together, with songo.info’s star rider Sipho Madolo guiding their training. Klaas relayed that they kept their training simple, “doing long rides and lot of intervals but at least two Four Passes (a popular 100 kilometre long loop starting and finishing in Stellenbosch via Grabouw and Franschhoek) per week.” The quartet also relied upon Madolo and fellow songo.info programme graduate and four time Epic finisher Azukile Simayile for advice. “Train hard and eat smart” were the key points Klaas said he took from their advice. “They also told me to expect anything at the race. Maybe it goes well and we win the Exxaro Category or maybe not because there will lot other strong riders… But it will come down to team work,” Klaas concluded.

So it did for the Songo-Investec 1 team, as Klaas and Leroux struggled to match each other throughout the race. Looking back Leroux was disappointed they could not challenge for victory in the Exxaro Category, but he realises that the way they struggled to work together when one or the other was suffering was partly to blame. “My biggest lesson I learnt from the Epic was to learn to communicate and stay together as a team,” he said. If he could do it all again he would approach the stage race partnership differently. “You need to help each other. To be patient, to learn when to lead and how to talk to your partner,” he concluded. Klaas and Leroux learnt that communication during the Epic is not simply about relaying how you are feeling, but also about motivating each other.

Speaking of the challenges they faced during the Absa Cape Epic Ntshakaza admitted that the biggest obstacle he faced was “to wake-up every day and race after long day the previous day. I was tired the whole week!” he confessed. Highlighting once more why experience and team work are so integral to success in the Epic. Of the four only Klaas had completed an Epic before the 2017 edition, so while they had been warned of what to expect experiencing it first-hand can still provide a shock. Riding through exhaustion and helping their teammates stay motivated were small daily victories for the songo.info riders. But ones they will carry into the 2018 Absa Cape Epic and beyond if they are once again selected by songo.info to represent the programme at the Epic. 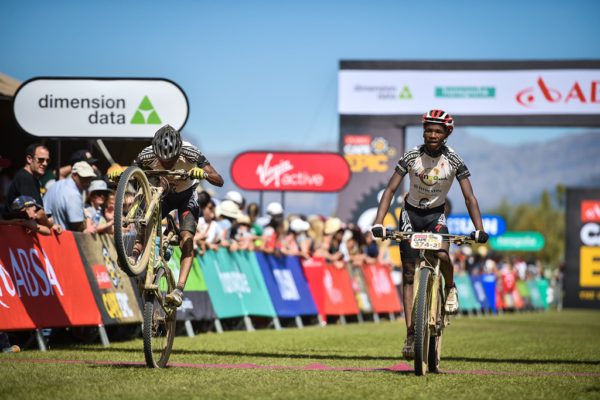 Theo Ngubane wheelies across the final finish line of the 2017 Absa Cape Epic alongside his Songo-Investec 2 teammate Lwazi Ntsakaza. Photo by Sportograf.

Looking ahead to the rest of 2017 the quartet all hope to spend as much time as possible on their bikes, but they have other goals too. Having finished his studies Thando Klaas is currently job hunting while Lwazi Ntshakaza and Theo Ngubane will be focusing on completing their higher education qualifications. Lorenzo Leroux, meanwhile, has already joined the job market and will be seeking to balance work and riding.

At twenty two and twenty three years old, each of them is moving steadily into a phase where songo.info will no longer play a pivotal day-to-day roll in their lives. But through assisting with their post high school education and by providing the opportunity to ride the Epic the songo.info programme has helped equip them to take on the challenges of life’s next phase. Having completed the guiling 2017 Absa Cape Epic together they know they can rely on each other; for in life, as in mountain biking stage racing, team work is vital. 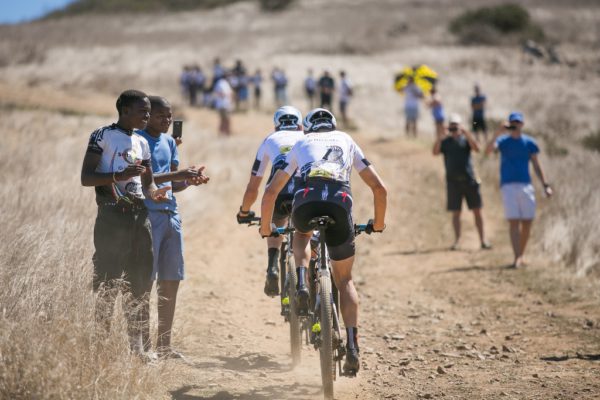 The songo.info charity was founded by Christoph Sauser and Songo Fipaza to uplift the children of Kayamandi, in Stellenbosch, through education and sport. Photo by Mark Sampson/Cape Epic/SPORTZPICS.