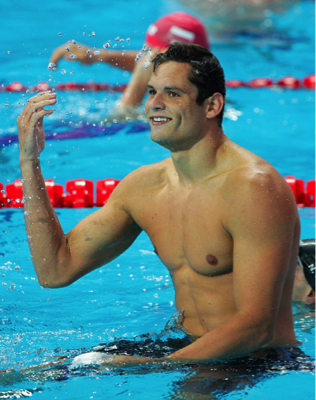 Florent Manaudou at the World Championships 2015

The announcement of the five year agreement with FINA comes further to the success of Team Speedo sponsored swimmers at the current World Championships in Russia, which saw Florent Manaudou (FRA) take the gold medal in the men’s 50m butterfly final, with a time of 22.97 seconds. Manaudou also helped lead his team to victory in the men’s 4x100m Freestyle Relay, defending their world title scooping gold in 3.10.74 and clocking a 47.93 split.

Australia also powered to victory in the Women’s 4x100m Freestyle Relay, with Team Speedo Emma McKeon (AUS) posting a split of 53.57 on the second leg, and they won in 3.31.48, setting a new Championship Record time.

The first of this year’s FINA/airweave Swimming World Cup events, taking place in Moscow, will also see the first time this event will be swam long course (50m pools), and will entice superstar swimmers from around the world to take part ahead of the 2016 Olympic Games. This means the event is set to attract a broad audience of spectators and super star athletes, including Florent Manaudou and Missy Franklin, the five time Olympic medallist who is the latest ambassador to join Speedo’s growing team of ambassador athletes.

Speaking of her recent partnership with the world’s leading swimwear brand, Missy said: “As a new Team Speedo athlete, I am excited to race in these events around the world, share my passion for swimming and hopefully inspire people to get in the water. The FINA Swimming World Cup Series is one of the most established competitions in the sport and I am very much looking forward to swimming this year.”

As part of Speedo’s agreement with FINA for the SWC, Speedo will be present at all eight events globally and have a dedicated retail space at each of the events across the Far East, Europe and Asia and will create experiential areas for spectators to meet Speedo’s top athletes. Additionally, Speedo will have the opportunity to cover and stream the events live on its digital platforms.

Jamie Cornforth, Vice President of Product and Marketing at Speedo International said: “The FINA Swimming World Cup is a prestigious global series, so it’s fantastic for Speedo to be associated as the Exclusive Swimwear and Swim Equipment Supplier. The series is a great opportunity for us to support our fantastic Team Speedo athletes and teams, who around the world have the ability to inspire spectators and aspiring swimmers to get in the pool.”

Speedo, which actively works with communities around the world to raise awareness of swim safety, will also support FINA’s ‘Swimming for All, Swimming for Life’ programme as the Exclusive Worldwide Swimwear Partner.

Dr Julio Maglione, President of FINA, said: ““FINA is very pleased with this agreement, as we have a long-standing relationship of success with Speedo. The reputation, quality and high-level of products is well-known by our athletes and officials.  The involvement in our ‘Swimming for All, Swimming for Life’ programme proves that Speedo is active not only with the Elite, but also in the area of Development.”