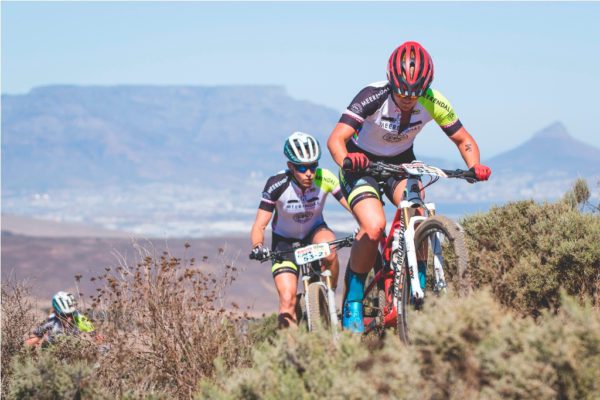 Meerendal CBCs Jennie Stenerhag and Esther Süss were second fastest in the Cape Epic’s 26km long Prologue course, which kicked off at Meerendal Wine Estate on Sunday 19 March. Ahead of Stenerhag and Süss in the women’s category, were Stenerhag’s ex-teammate Robyn de Groot and Sapine Spitz.

Hot and dusty conditions greeted the 1 200 riders as they prepared to take on the short but challenging Prologue route through the Durbanville Hills. For Meerendal CBC riders, months of hard and consistent training were finally behind them, and for the leading women’s team the day was extra special, as it was also Süss’ birthday.

“I woke up with the start gun early in the morning, and since then my heart rate kept rising,” laughed Süss as she warmed up ahead of the race start. “For the last two months, everyone kept asking me if I’m ready,” Stenerhag added, “so I’m really glad today had finally arrived.”

Just before 10h30, local time, the wait was finally over. Meerendal CBC 2, featuring Hielke Elferink and Cornelia Hug, rolled down the starting ramp. A minute and a half later, Stenerhag and Süss followed suit.

By the first time check, it was clear that it was going to be a good day for Meerendal CBCs leading team. They were second on the time sheets atop the Dorstberg, at the 5km mark. Although they lost time on the stage winning, to de Groot and Spitz, they limited their losses to only 39 seconds on a course which favoured the stage winners’ explosive power, rather than Stenerhag and Süss’ supreme endurance. They managed to establish a one minute and 39-second gap to the fourth placed stage finishers and pre-race favourites, Ariane Luthi and Adelheid Morath. In third place, one minute and 10-seconds behind Meerendal CBC, were Mariske Strauss and Annie Last.

Speaking after the stage race, Stenerhag said, “Obviously we would have liked to have won this stage, but we are happy with second place. There is still a long week ahead.” Stenerhag was the stronger of the pairing on the day, as Süss struggled with the heat, but with a long afternoon to recover before making their way to the colder climates of Hermanus, ahead of Stage one on Monday, this afternoon.

The heat also got to Elferink and Hug, the Meerendal CBC 2 riders, who finished the stage in seventh position seven minutes and 55-seconds down on the stage winners. But as Stenerhag said, the Cape Epic has only just begun and with seven long stages ahead, it is all still to play for.

Follow @CapeBrewingCo, alongside daily updates on teams Meerendal CBCs developments and results. For the latest updates, follow the Cape Brewing Co. Facebook page and view some of the best images of the race on Instagram at capebrewingco.