Sun’s out funs out at Berg & Bush day three 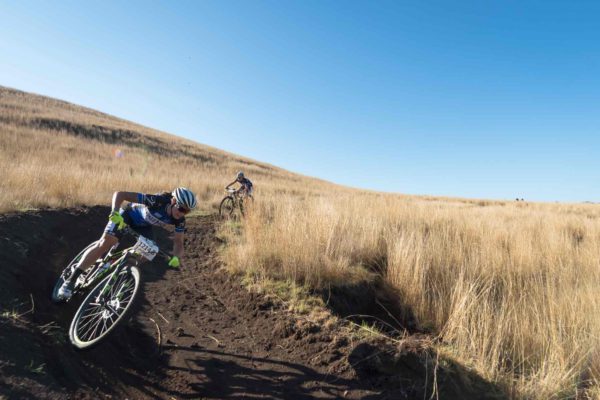 After a few days of overcast conditions, the sun finally came out at the 2017 Grindrod Bank Berg & Bush Descent. It shone particularly brightly on the men’s and ladies overall race winners, who were in command from day one to day three.

On day three, Buys and Beukes claimed their second stage win of the event in a time of 01:51:45. McDougall and Sanders won day three in the ladies race (02:03:54), claiming their third straight stage win in the process.

“We’re so happy with this win,” beamed McDougall. Sanders added, “We’re happy with the way we rode, and the way we approached the racing. Last week we had terrible luck at a race, but this weekend everything wen’t according to plan.”

With a few races still to come before the end of the season, McDougall will eventually clock in at 10 stage races for the year. The riding seems to be paying off, though. “Sam and I are racing really well; we’re in good form and in a good place. At the moment we are riding at a similar level and that really makes for a good team vibe. We also both enjoy riding, which makes racing together great fun.”

For Buys and Beukes, the victory was another positive result in their debut season as Team Pyga Euro Steel. “It’s great to win today,” said Beukes. “It’s my first time here, so to walk away with the title is very rewarding.”

The final day’s racing got off to a slower start than the previous two days, with the speed only ramping up at the famous Spionkop climb. It was here that Buys and Beukes accelerated, with Gawie Combrinck and Nico Bell (NAD Pro MTB) in close attendance. The four eventually crossed the line together.

“Phil and I have worked hard this year,” said Beukes. “We’ve planned well, prepared well and obviously had our fair share of luck. The win is a good reward for the work we’ve put in. I won’t lie, though, it’s been a long year and I’m starting to get tired now.”

Overall, the weekend’s riding went down a treat with the front, middle and back of the pack. “This was an amazing weekend of riding,” said Beukes. “Today was great; the final 10km stretch is incredible, but I think my favourite day was day two, single track all the way.”

A satisfied Gary Green, the race organiser, was also happy with the overall race outcome. “It’s very rewarding to stand on the finish line and listen to all the positive comments,” he said.

“A lot of work goes into the trails, and the local land owners are very accepting of us taking 1000 mountain bikers through their property three times in the week, so to know that everyone is enjoying themselves makes our job easier.”