Suss survives to hang on to the lead 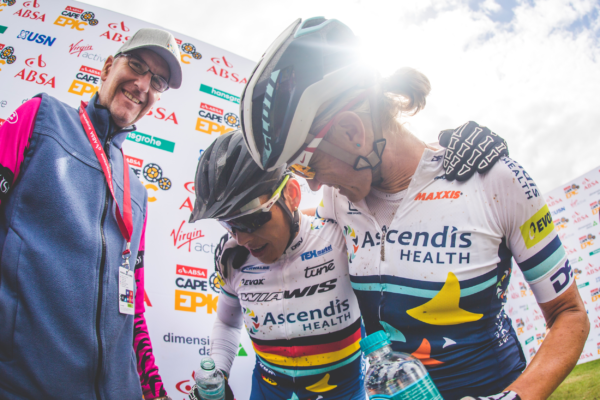 “I thought it was the end of our race,” said Absa Cape Epic Hansgrohe Women’s category leader Jennie Stenerhag when describing her partner Esther Suss’s crash near the finish.

Suss was left lying on the ground tangled up in her bike just seven kilometres from the finish of Stage 5 after the crash. Meerendal CBC teammate Stenerhag had to help untangle her and eventually Suss was able to get up and rejoin the fight for a stage victory.

They eventually caught up with South African Robyn de Groot and her German partner Sabine Spitz (Ascendis Health) and the race ended in a sprint for the line. In spite of their third stage victory on Friday, time is running out for De Groot and Spitz to challenge for the Hansgrohe Women’s category title.

On the day De Groot and Spitz did everything they could – and even had some help from the unwitting male rider who caused Suss’s crash – but they could not make a significant dent in Meerendal’s almost 13-minute leed.

Saturday’s 103km Queen Stage, with a brutal 2 750m of vertical climbing, will be Ascendis Health’s last chance to haul themselves back into contention, but with just one short stage after that it seems likely Meerendal CBC will be crowned as champions at the finish in Sunday.

“It was quite tough out there today,” said Stenerhag after the finish. “Sabine and Robyn really put some pressure on us from the start, but we still managed to get the hotspot. After that it was very up and down. Sometimes they went super hard and then they eased off.

“We were all together near the end with about seven kays to go and we passed a group of men who had started ahead of us. They had stopped on the side to let us pass but the last guy, after Robyn had gone through, decided he was going to get back on to the singletrack and he got on right in front of Esther.

“She had no chance and tumbled with her bike on top of her.

“I thought it was the end of our race. We had to stop there and try to tangle her out of her bike first of all, and then get going. She is a little bit sore on her chest.

“We then had to go really hard and I put down everything I had to try and get back. We got back on with two kays to go and I am just really happy we came in together and did not lose any time after that crash.”

Suss said she expects to be ready for Saturday’s tough Queen Stage: “I think I will be okay. My chest is sore and shoulder is a bit stiff, I but will get a massage tonight and see how it is in the morning.”

De Groot was philosophical after the stage.

“We had no choice but to do our best to put them under pressure today. We have time to make up and we did our best. It was a really hard stage … from the start it was pretty intense.

“We hoped we would get away and we did away a couple of times, but not enough to make anything stay away.”

Stenerhag, while optimistic, was not prepared to take the victory of granted.

“Nothing is done until the end. I thought it was the end of our race out there today so you just never know. We have to wait until it really is over. We just have to stay with them and then try and not lose any time tomorrow and we will see.

“Absolutely I would have taken this lead at this point if we had been offered it at the start.”

In the Virgin Active Mixed category, Jenny Rissveds and Thomas Frischknecht (Scott-Sram Nextlevel) enjoyed a huge victory on the stage and only a major disaster looks able to prevent them from taking that title when the race finishes at Val de Vie on Sunday.

Grant Usher and Amy Beth McDougall (joBerg2c-Valencia) are second, but with a 42-minute gap they have little realistic hope of a victory.