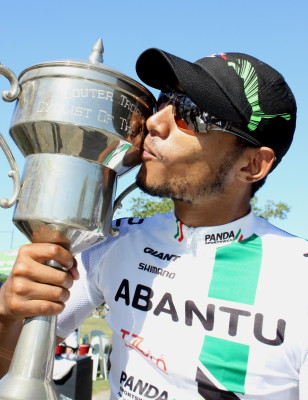 Team Abantu will be looking to extend its unbeaten run to six consecutive victories at the aQuellé Tour Durban presented by Sunday Tribune following Reynard Butlers victory in the 21 edition of the race last year. – Dave Macleod/
Gameplan Media

Durban – The Durban-based Team Abantu is determined to maintain its five year unbeaten record at the aQuellé Tour Durban presented by Sunday Tribune when the 22nd edition of the 105km Classic takes place on Sunday 26 April.

Last year Reynard Butler took the title, following in the footsteps of team mate Nolan Hoffman, who enjoyed a hat-trick of wins between 2011 and 2013, and Dean Edwards, who is now the outfit’s team manager and who won the 2010 edition of the race.

With Hoffman coming off the back of a successful defence of his Cape Town Cycle Tour title, Team Abantu has a full April programme that includes the South African Track Championships, the aQuellé Tour Durban title defence attempt and the new Cycling South Africa Autumn Series of road races in KwaZulu-Natal.

“The aQuellé Tour Durban is a race that we have always targeted, and we have won it five years in a row,” said Edwards. “It is a massive event for us, being Durban’s only professional cycle team.”

“The guys have had some time off after the Cape Town Cycle Tour to rest the bodies and the minds. From 1 April we start the base training and planning the roles that each rider will play in our upcoming races,” said Edwards.

Edwards hinted that the team might revert to trying to get Hoffman to the line for a fourth title, after opting to ease the pressure on the over-worked Hoffman last year, and setting up his young protégée Butler to add his name to the Tour Durban trophy.

“We have taken the very tough decision not to send Hoffman to the Track World Champs this year,” said Edwards. “Being who he is, he doesn’t want to go there under prepared. If he were to go then he’d go to try and win it; he doesn’t want to make the trip if he knows he doesn’t have a realistic chance.

“We still believe that he has what it takes to win the Track World Championships in the future though,” he added. “The hunger is definitely there!” 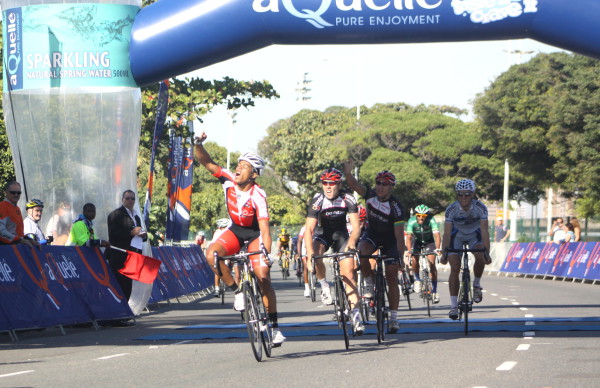 Event organisers are hoping to have another top class field at the 2015 55km Cyclo-Cross event at the aQuellé Tour Durban presented by Sunday Tribune when the event gets underway at the iconic Moses Mabhida Stadium on Sunday 26 April. – Dave Macleod/
Gameplan Media

Edwards predicted that competition would be significantly tougher this year as many top pro teams would be committing to the aQuellé Tour Durban on the back of the announcement of the three UCI points bearing road races in the province in the week immediately after the iconic one day event.

“I fully expect teams to use the Tour Durban as a sort-of warm-up race the day before the three UCI races start.”

“Hats off to Cycling South Africa,” he added. “They have heard the appeal from the elite team owners for professional specific events with increased distances and good prize money as per the UCI standards and especially with us being in an Olympic qualification cycle, it’s going to make it very appealing and attractive.

“Together with the achievements of hosting Mountain Bike World Cups and World Champs in Pietermaritzburg in years gone by, this just showcases what the province can do, especially from a Commonwealth Games point of view,” said Edwards.

Edwards said that the bolstered programme of elite road races could well lead to more major teams basing themselves in KwaZulu-Natal during the winter months.

“Teams could base themselves here from April to July because we could race a full winter series here. It is better than any other part of the country at that time of year and it could become the destination for pro cycling in South Africa,” he concluded.