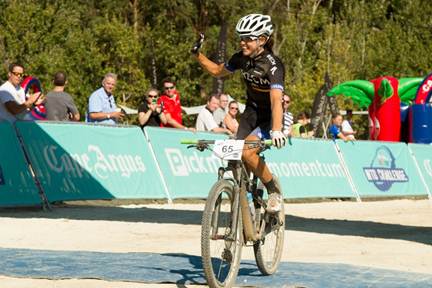 (Stellenbosch, 01 March 2015) They punched the air, bumped fists and grinned – sometimes all at the same time – as they completed their ride and collected their medals on Sunday, bringing the Cape Town Cycle Tour’s weekend of mountain biking to an end. About 3 500 cyclists competed in the Cape Town Cycle Tour MTB Challenge at Le Bonheur Wine Estate in Stellenbosch, held over two days this weekend.

Cyclists riding the 38km and 55km routes were treated to a feast of mouth-watering mountain biking in the Greater Simonsberg Conservancy in Stellenbosch as they carved up single track and devoured gnarly descents. “It was hot and sandy,” said Craig McKune. “No, it was sandy and hot,” argued Steve Pike in the chill zone. They were both right. Riders battled soft sand and temperatures approaching 30 degrees. They also had to contend with sharp steep climbs and wind, but were rewarded with magnificent views, shady and fast forest trails and some of the country’s finest congestion-free single track.

Jerry Groenewald, participating in his first Cycle Tour MTB Challenge, was a bit alarmed when his saddle came off 15km before the finish. At water point four, after riding 7km standing, he was still fighting to get to the end. Asked how he was riding without the saddle, he replied, “with difficulty”. As long as he didn’t sit down, he said, he thought he should be fine.

After the ride, mud-caked cyclists chilled in the hospitality area, wolfing down Spur burgers, drinking beer and exchanging war stories and comparing wipe-outs. “What happened to you,” said one rider to his friend, whose face was covered in dirt. “Let’s just say I own a bit of the farm,” he replied.   The riders agreed that the MTB challenge, which is in its 14th year, just gets better and better each year.

A day earlier, Herman Lazarus celebrated a personal achievement after completing the 22km mountain bike ride. In 2014 Lazarus was approaching midlife as an unfit smoker. He decided to embark on a mission to become healthy. His first step was to stop smoking, which he did successfully. And then, with the help of his company Lieben Logistics, which sponsored kit and bikes to their employees this year, he started cycling. He completed the 22km on Saturday with colleagues riding alongside him in support.

The long MTB Challenge routes, which were designed and built by route co-ordinator, Meurant Botha of Dirtopia, saw the introduction of new scenic and shady areas for riders, as well as an increased amount of single track – the most in the history of the event.

“Feedback about the route has been positive – the top riders described it as a cross country route with lots of variety,” said Botha, who started building the trail in November. “We’ve had 24 guys on the go for the last two months, cutting the route by hand.”

Botha’s plan is, with the help of the local farmers in the Greater Simonsberg Conservancy, to unlock the mountain and, with its network of trails, make it a mountain biking mecca.

Winning in a record time of 02:12:54, Erik was thrilled, saying his victory was even sweeter because Ariane had also won. Eric described the race as aggressive. “We (Eric and Johann Rabie) were leading from the beginning with big guys chasing us, but we managed to stay away for a long time.  Towards the end I got a small gap at the last single track section which helped me to come out in front.  I’m super happy to take the victory today.”

Edward Boshoff was crowned the winner of the 38km event, followed by Danie le Roux, and Johann Trotzky in third. Allison Morton took first place in the ladies 38km category, while Amy Burton finished in a close second, followed by Marie Heatlie.

David Bellairs, a Director of the Cape Town Cycle Tour Trust who organises the annual event, said the 2015 race was a resounding success and the venue and routes had continued to impress riders.  “It was fantastic to see the competitors taking on the tough, hot and windy conditions today.  A huge thank you must go to the entire team at the events office that put together this wonderful festival of mountain biking.”

Renée Jordaan, Operation Director, said from parking, to toilets, to routes, to medical facilities, to the finish everything had run smoothly. “We have been able to offer good quality mountain biking. We saw a lot of novices enter the 14km and 22km on Saturday and, hopefully, they will get into mountain biking and be back to enter the 38km and 55km routes next year. This has been a very positive event – and it’s good to end on a high as we head towards the Cape Town Cycle Tour next week.”