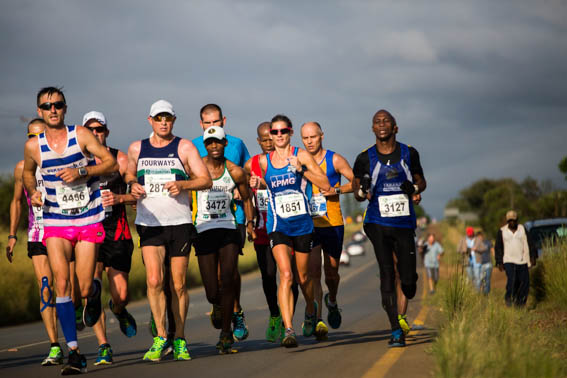 Once considered the baby brother of the more prominent Old Mutual Two Oceans Marathon and Comrades Marathon, the Old Mutual Om die Dam Marathon has come into its own, having dramatically grown its stature and appeal over the past few years.

Om die Dam was started in 1990 by race organiser Piet Fourie and a handful of volunteers from the Hartbeespoort Marathon Club. In just 17 years the number of participants has grown from 50 to more than 10 000. In fact, its popularity has grown so much that this year both the half marathon and the 50km ultra marathon were sold out – weeks before the event – for the first time ever.

This year also sees a new venue and a new route; the race venue has moved to the Oewer Club at Schoemansville, providing runners with a more exciting and challenging route. The Hartbeespoort Dam picnic area will also give families great new opportunities for a fun day out.

“We’re delighted about the growth of the event, but not surprised,” says Karen Thomas, Old Mutual Head of Brand. “The race organisers work tirelessly to line up an amazing experience for all runners every year, while the natural beauty of the area really makes this another jewel in the crown of the three ultra marathons sponsored by Old Mutual. Running is certainly booming, and we are proud to play a part in encouraging and motivating people to set exciting goals for themselves.”

Om die Dam organiser Johan von Molendorff says during its 27 year history the race has evolved and expanded to include shorter race distances to cater for a broader spectrum of runners.

As its popularity has grown, Om die Dam has increased its professionalism and kept pace with the latest organisational developments, he says. “For example, about two years ago, the race introduced ChampionChips for runners, joining other top flight events like the Comrades Marathon.”

The event has been categorised as an eco-friendly race, and has held IAU (International Association of Ultrarunners) Gold status for the last two years, sharing the honour in South Africa only with the Old Mutual Two Oceans Marathon.

Turner believes Hartbeespoort is an ideal venue for a marathon. “It’s out of town from Joburg and Pretoria, but not too far. So it’s easy for family and friends to come and support, and treat Om die Dam as a weekend getaway. There are many attractions and plenty of good accommodation options in Hartbeespoort.”

This year’s event will be held on 18 March, and though the ultra marathon and half marathon are filled to capacity, runners can still sign up for the 10km and 5km runs.

Last year’s men’s winner was Fanie Matshipa, who beat the three hour mark by 30 seconds. Caroline Wostmann crossed the finish line first in the women’s race with a time of 3:38:38.

A substitution window period will be opened from 2 to 8 March where substitutions on a like-for-like basis can be done.