The official results and… the Stoke 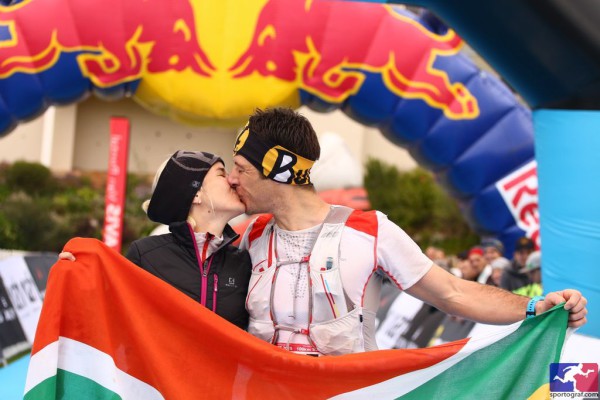 On Saturday 3 October 600 runners made up of 32 nationalities lined up to run either the 20km, 65km or 100km course from Gardens Tech Rugby grounds in Cape Town. Table Mountain hid beneath a thick white mist, and 6 hours of solid, icy rain played havoc with the nutrition and hydration plans of the runners. The brave stepped up, and ran out, lead by race organisers Nic Bornman, Stuart McConnachie and a dramatic red flare.

A rain soaked start / finish area grew steadily in terms of atmosphere and by the time the sun rose and the first of the marshals were back from their posts, the coffee and food was being readily consumed as supporters gathered in the large marquee to track their runners or welcome them home. 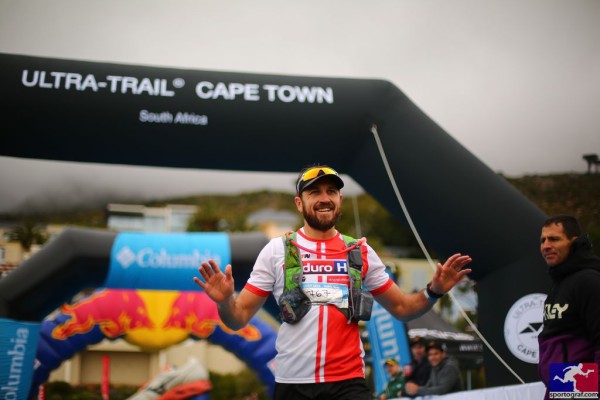 The second group of runners left behind a flare at 7am, tackling the 20km urban trail course without any break in the challenging weather. William Leslie took top spot in the men’s race, in a time of 1:45:22. Patrick Colborne came smiling through in a time of 1:48:39 with William Battersby completing the men’s podium in a time of 1:49:20. Katya Soggot was first lady in and 5th overall, in a time of 1:52:09. The next lady in was Tanja Mackay-Davidson, followed by Danette Smith.

The focus then turned to the 65km race, with the tracking and timing expertly managed by Ultra Sport Live TV. Four screens in the marquee showed live results from the field, cutting between the GPS trackers and camera footage of the runners. AJ Calitz won the event in a time of 7:07:57, cheered in by a growing crowd on the finish line. The first relay team finished at the same time, followed by Piet Calitz who was also first VET in a time of 7:25:23. Third place in the 65km race went to Roelof Mostert in a time of 07:34:54. AJ and Piet ran together for a long stretch of the race and were overheard discussing the origins of their shared surname. They aren’t related, but they definitely share some trail talent.

Not much later, a familiar smile came storming over the finish line, taking first position in the ladies race. Landie Greyling finished in 8:36:20, followed by Thalia Charalambous in a time of 9:01:20. Karen Behrens from Germany completed the ladies’ podium in a time of 9:59:49.

A hot room had to be set up to treat some of the runners who had battled the low temperatures at the top of the mountain, and soup was quickly purchased and made available on the finish line. The weather simply did not let up, but neither did the music and it did not dampen spirits or enthusiasm. As the cowbell rang home the runners, focus shifted to the 100km race, where the leading men seemed to be holding hands in a close circle of 4 for much of the way. Christiaan Greyling eventually broke away to win the 100km, describing it on social media as “the highlight of my running career to date”. Christiaan’s time was 11:24:50 and there wasn’t a dry eye around when Landie welcomed hubby home with hugs and kisses. Christiaan was followed by Jock Green in a time of 11:39:47. Hours earlier the crowd had watched live footage of Jock sitting at the Clay Café aid station in Hout Bay, taking a 7 minute pit stop to eat everything from sweets to salty crackers. The crowd cheered when he finally rose to smash the rest of his race. Third place was taken in style by Johnny Young, as he pushed through from 5th position in the last section of the race. Absolute talent and planning took him ahead of Bennie Roux, who came in some 6 minutes later.

The 15 hour cut off took no prisoners, and many of the runners were not able to return to storm the blue Columbia finish line, beneath the multiple inflatable arches. The ladies race was always set to be a locking horns affair. In the end, the cold got the better of US legend Devon Yanko, and she took third position in a time of 13:13:19. Devon has described UTCT as the toughest race of her career. A massive statement from an elite runner with more than 30 ultras to her name, and three marathon wins this year alone.

Local trail personality Chantel “hotpants” Nienaber had a perfectly planned and expertly executed race, taking second position in a time of 12:56:41; a full 20 minutes faster than the winning ladies’ time of last year.

Top spot on the ladies’ podium was taken by the lethal little blonde trail pixie; Kerry-Ann Marshall. Marshall was breathing down the necks of the top men for the entire race, taking an overall 5th position in an incredible time of 11:53:03. When Kerry flew in to the finish area, a huge SA flag flying out behind her, the bells rang and a massive cheer went up. This lady is pure talent and determination. She and Christiaan remained on the finish line to welcome the very last runners in later that night, showing true professionalism and heart.

There were many stories of heroism throughout the day, but one in particular stands out. 2015 Comrades winner, Gift Kelehe, was one of the absolute favourites for a top position. It wasn’t to be, and local trail runner Noel Ernsten sums it up perfectly, “The most incredibly gutsy, ballsy performance, for me, was from Gift Kelehe. The guy started as firm favourite, 2015 Comrades champ with some serious cred. He spent half the race barely ahead of the sweeps in pain and close to hyperthermia, but refused to stop. Gift you started as a champ, but Hell you ended a legend.”

The last runner across the line was Rieghard Janse VanRensburg. Stuart ran him in, with a final red flare in hand. Again, not a dry eye on the finish line, even though the rain had stopped a few hours earlier.

As accolades for the UTCT team continue to pour in over social media, the runners tag and share the many professional images made available via Facebook, and the volunteers take a much-deserved high-five, there are already questions about when entries for 2016 will open. Watch this space.