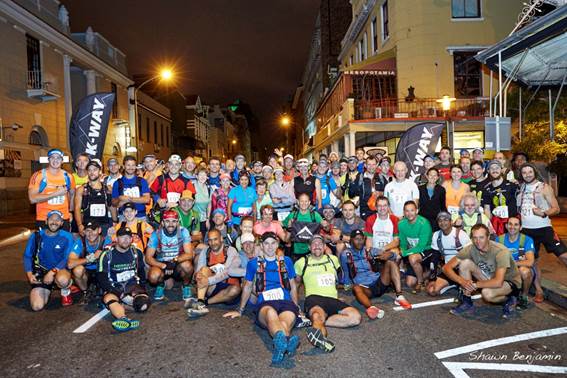 K-Way is South Africa’s leading brand of outdoor technical gear and apparel, offering a range of technical, adventure and travel inspired merchandise. From skiing, hiking, and climbing, to travel and everything in between. K-Way strives to create a technical, credible and aesthetically pleasing range of functional equipment and apparel, which is recognised as the leading outdoor brand in South Africa.
Photo Credit: Shawn Benjamin of Ark Images

For 20 years runners have assembled before sunrise on Long Street for the start of one of the country’s most challenging races that takes them up and down three peaks surrounding the Cape Town City Bowl: Devil’s Peak, Maclear’s Beacon (via Platteklip Gorge) and Lion’s Head, in just one day. Participants have 14 hours to complete the 50 kilometer Three Peaks Challenge on Saturday, 5 November, which is presented in proud partnership with K-Way.

Says Odile Hufkie, Marketing Manager at Cape Union Mart: “K-Way, South Africa’s leading brand   of outdoor technical gear and apparel, is proud of our association with this gruelling event. It provides the perfect platform for trail runners and enthusiasts to test their grit, endurance and stamina. Only the country’s fittest athletes can conquer Cape Town’s iconic peaks in under 14 hours and the fact that participants need to return to the city centre (Greenmarket Square) between peaks, makes it exceptionally demanding, both physically and mentally.”

According to race organiser, Gavin Snell, this year is the 20th Three Peaks Challenge in terms of it being an organised event. “The first event took place in 1997 as a centenary celebration of Carl Wilhelm Schneeberger’s 1897 feat, when he ascended all three peaks in one day. Over the years, the race has grown in popularity and stature, with the country’s top trail runners participating.”

Snell expects it to be a close race. “We have outstanding athletes participating. Defending champion and winner of the event for the last two years, Martin Kleynhans, will be at the start, as will Andrew Hagen, who has won it three times. Last year’s runner-up, Pieter Calitz, has entered again as well as Melany Porter, last year’s winner of the women’s race. K-Way Athlete, AJ Calitz continues to hold the record which was set in 2012.” Snell emphasises that anything can happen on the day. “It all depends on what type of day the athletes are having. You have to respect the mountain and rigours of trail running.”

Another athlete to watch will be 77-year old Brian Key. “It will be his 14th Three Peaks Challenge. He is remarkable and was still running in the top 10 a few years ago, even at the age of 70!” says Snell.

Three Peaks is the type of event that runners return to year-after- year. Snell adds: “It happens to be my 20th – I have completed all 19 thus far, having done the first in 1997. We have a full field of 150 and a waiting list of people who are ready to substitute if necessary. Last year, Shaun Schneeberger took part and will be participating again next week. He is a great-great grandson of Carl Wilhelm Schneeberger, the pioneer of 1897.”

Hufkie concludes: “It’s a spectacular race to watch and everyone’s invited to join us in Tafelberg Road, where there is an aid station. We wish all participants the best of luck and will be egging them on to complete this ultra-distance trail running event on the mountain, often in extreme weather conditions.”

Further information on the race can be found on the Three Peaks Challenge website – www.threepeakschallenge.co.za