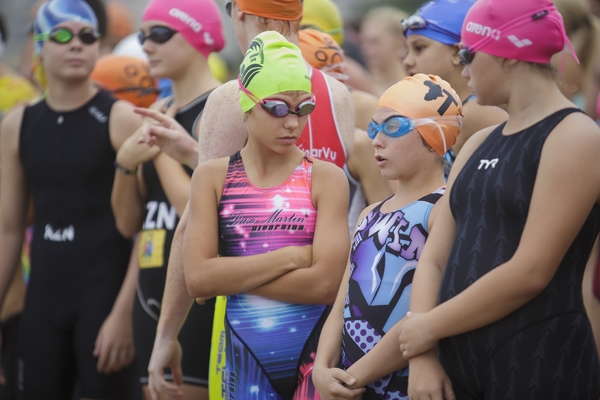 The 3rd leg of the no 1 triathlon series in South Africa, the TINMAN SERIES took place in Durban yesterday. Despite the cold temperatures and on-off rain, over 550 athletes entered to take on the penultimate event in the series. On Race day, over 400 competitors raced along Durban beautiful Beachfront thawing out the winter chill.

Sea Conditions were optimal with no swell and a small side current. There was also no wind which made for some fast times despite the wet roads. The Series got underway with the 10km foot race which was won my Derrick in a shade over 35 minutes with Jenna Challenor easily taking the ladies race in a very fast time of 36 minutes. Next up were the rookie competitors (the future stars of tomorrow), James Haw won for the umpteenth time with newcomer, Bridget Theunissen taking the ladies win over the 200m swim/6km cycle/2.5km run. Next up were the Sprint Distance Triathletes, where Darren Marquiss stamped his authority on proceedings by winning the Males Section in a fast time of 1:04 while Jayme-Sue Vermaas took the female honours in 1:12.

The main event of the day saw the challenge athletes take to the waters. First onto the bike after the 1km swim was Junior Ben De La Porte, closely followed by Rudolf Naude and Glen Gore. It was De La Porte, Naude and Brad Venter who dominated on the 32km bike section which saw the trio come off the bike together to start the 10km run. De La  Porte dropped out after 5km whilst in the lead as he is still a youngster and did not want to push himself over the senior distance just yet. This left Naude well in the lead with Venter chasing hard behind. The run of the day was to come from Gareth Marquiss who came off the bike in 4th position, only to see him run through the field into 2nd place as the athletes crossed the line. Naude clinched a comfortable victory with Marquiss taking 2nd spot and Venter the final podium spot for the day. The ladies race was equally exciting with Mikaela Jonnson leading from start to finish. She however was pushed all the way by a hard running Teneal Featherby who finished in 2nd place, just 8 seconds back of Jonnson. Hayley Mee took the final ladies podium in just over 2hr

Another successful event which is fast becoming the breeding ground for the top triathletes in the country that are active over the Sprint and Olympic distance events. The final event in the series takes place in October. Visits www.bactive.com for entry

Results can be found at this link: http://www.racetecresults.com/Results.aspx?CId=35&RId=6059&EId=3