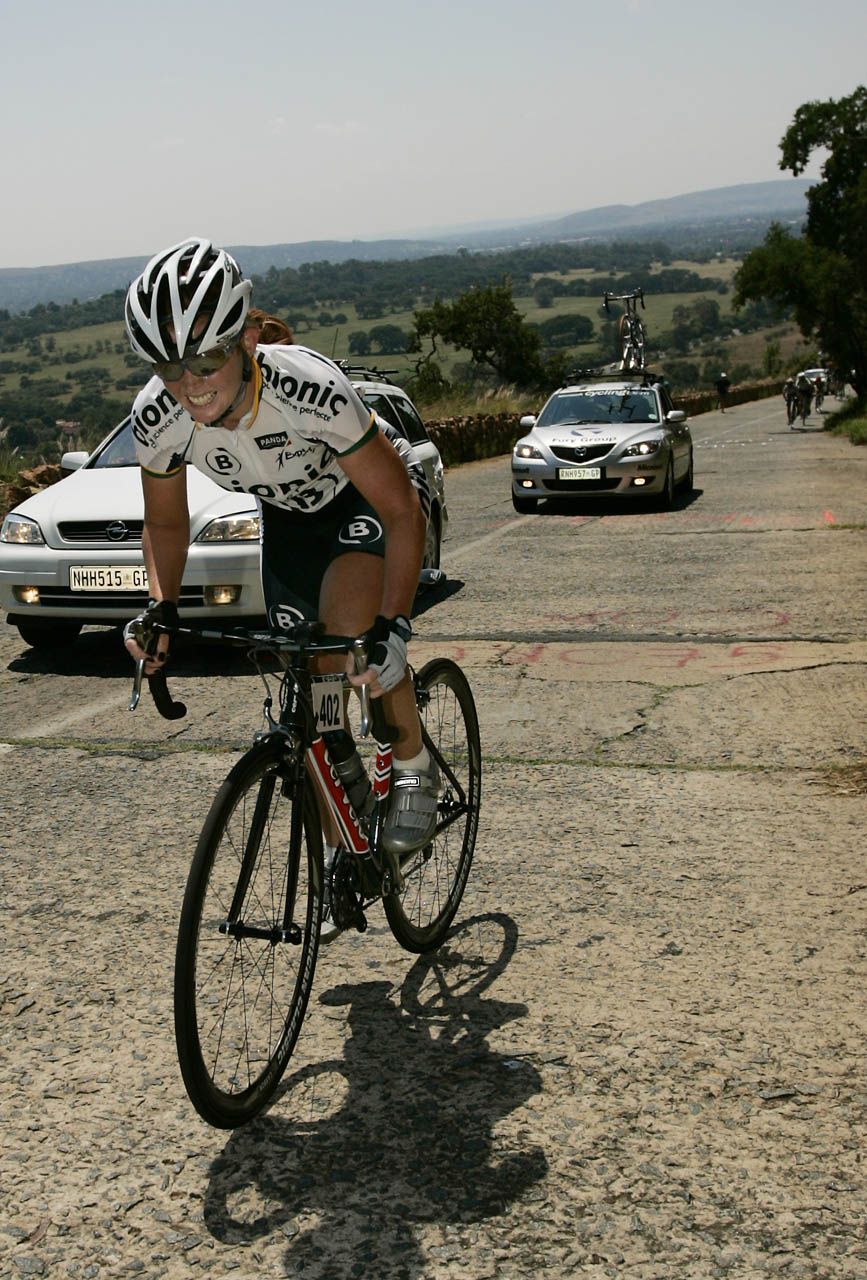 Former South African road cycling champion Ronel van Wyk, who won a memorable race in 2005 over the iconic Tom Jenkins climb, says the stretch will play a critical role in the Tshwane Classic in Pretoria this year.

The uphill challenge comes after 80km of the 98km feature race on November 5 and Van Wyk said it would “separate the men from the boys”.

Although it is relatively short at 800m, the steep cement road ascent will give participants a glimpse of what top professionals face in WorldTour races in Europe. It has an average gradient of nine percent and tops out at 14 percent in places.

Van Wyk, whose professional career stretched from 1997 to 2007 with 303 race victories, has particularly vivid memories of the Tom Jenkins climb and the role it played in her national road race triumph in 2005.

The 39-year-old, whose strength was sprinting rather than climbing, said the 120km event was the toughest of all the national championships she had entered.

“We had all the top female cyclists riding that day and did six laps around the Union Buildings before the last lap took us over Tom Jenkins,” she said.

“I knew that Anke Erlank (now Moore) and Dianne Emery, top climbers at the time, would make it very difficult for sprinters like Anriette Schoeman and me on Tom Jenkins.

“Anke attacked before the climb even started and I immediately knew we were all in trouble, except for Diane, who was the only one who could respond immediately.

“Halfway up the climb Anriette eventually joined them and I was stranded in no-man’s land.”

As she approached the halfway mark on the ascent, Van Wyk said she felt she would most likely finish fourth and off the podium.

“I felt like crying, but I told myself the race was far from over as we had about 6km to the finish line. I started time-trialling as best I could and, after chasing for about 4km, I could see them about 200m in front of me.

“I knew it was now or never and got out the saddle and started sprinting after them. I could see that the cat and mouse game had started between the trio, who were only metres away at that point.

“I looked beyond them for the first time and realised that we were hardly 250m away from the finish line. I gave it everything and sprinted straight past them, silently hoping I had enough left to pull it off.

“Obviously, I caught them off guard and their reaction was just not quick enough. They caught me on the line and you could literally cover all four of us under a blanket, but I managed to take an exhausting but ecstatic win.”

Van Wyk, who now lives in Lukasrand, Pretoria, ironically not far from the Tom Jenkins climb, said her story from that race was a reminder to never stop believing.

“For the pros, I would advise to go as hard as you can because it is never over until you cross the finish line.

“For the amateurs, it’s long so ease into the climb and stand over the top. On no account must you stop and I would recommend an 11-27 or 11-20 gear ratio to all riders.”

She said the climb would be the talking point of the day because the race is “all about Tom Jenkins”.

“It has a rough surface, and is steep and long. It will take a fairly strong rider about seven minutes to reach the top.”

“I do lots of off-road cycling and participated in two Cape Epics and the Transalp in Europe this year.”

She said she would always be involved in cycling as it was in her blood.