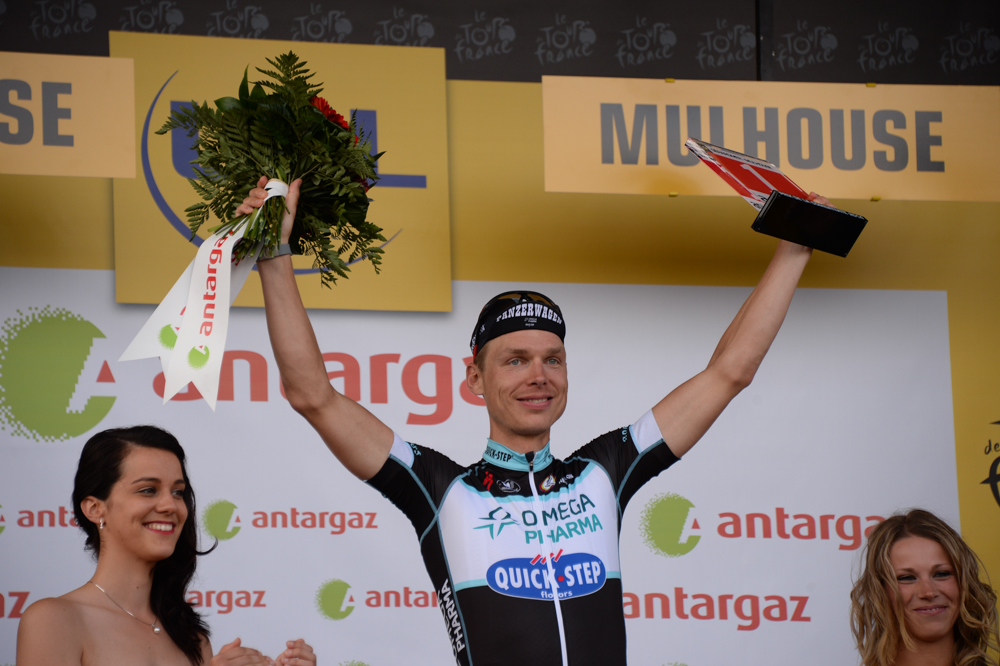 For the first time, Tony Martin has won a different stage than a time trial at the Tour de France but it looked like a time trial as he used the mid mountains stage in the Vosges to ride away with Alessandro De Marchi for 90 kilometres and solo for 59 kilometres! It was an enormous exploit by the German world champion for time trial but not the only amazing achievement of this eventful day as Frenchman Tony Gallopin took over from Vincenzo Nibali in the overall lead.

Voeckler appears at the front again

Martin on the move in the Markstein

With 59km to go and nine more kilometers to climb to reach the summit of the Markstein, Martin distanced De Marchi and started an impressive time trial effort. Since the côte de Gueberschwihr (km 86), Gallopin was the virtual leader of the Tour de France. Vincenzo Nibali kept the situation under control with his Astana team-mates setting the pace of the bunch but the Italian looked happy to get rid of the yellow jersey. Gallopin rode away in the downhill to Cernay after the Grand Ballon, eventually rejoined by Chérel and brought back by his former companions but he did enough to maintain high the pace of the group and claim the first yellow jersey of his career. Europcar finished the job to reposition Rolland higher on GC. Martin never weakened and kept an advance of 2.44 over the chasing group on the finishing line in Mulhouse where Tony Gallopin took the first Maillot Jaune of his career.