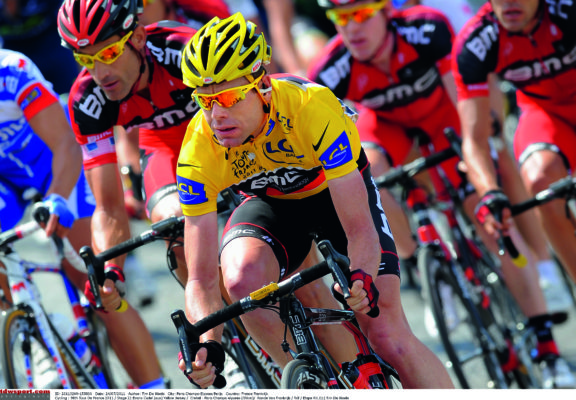 The BMC Absa Racing Team has been considerably boosted by the news that two Tour de France legends, Cadel Evans and George Hincapie, will be riding for them in the 2017 Absa Cape Epic.

Evans (40), from Australia, is the 2011 Tour de France winner while America’s Hincapie (43) is a 17-time Tour de France finisher. They will compete in the Masters category.

“Ever since I first heard about the Absa Cape Epic, I have wanted to try it. But they tell me it’s very hard,” said Evans about the grueling 8-day mountain bike stage race which starts at Meerendaal, Western Cape, on 19 March 2017.

“We are extremely excited to welcome two of the world’s leading cyclists into our Absa Pride family and I know that the support and camaraderie they will experience during their first tilt at the Absa Cape Epic will inspire them to ‘Conquer As One’,” said David Wingfield, Head of Marketing: Barclays Africa.

Evans, nicknamed ‘The Lung’, started his career as a mountain biker and won the World Cup in 1998 and 1999. He turned to road racing after placing seventh in the men’s cross-country mountain bike race at the 2000 Summer Olympics in Sydney. After two second-placed finishes in the Tour de France, Evans won the event in 2011.

“I am a racer, but we are competing against far more experienced riders so we have to be realistic,” Evans said. “If George and I can put up with each other, and race hard without any major mishaps, that will be good.”

Hincapie is one of the most legendary riders in the world, with numerous world championships, national championships and professional victories to his credit.

During his 19-year professional career Hincapie was regarded as the premier American classics rider of his generation. He competed in a record 17 Ronde van Vlaanderen races and finished second at the grueling Paris-Roubaix – the best ever for any American. Beyond the classics he rode in the Tour de France 17 times and won three US National Road Race championships.

Asked why he had chosen to do the Absa Cape Epic, Hincapie laughed: “Cadel made me do it … and it looks like it’s going to be an amazing adventure.”

“Troy (de Haas, their BMC team manager) sent us some videos on the race to start visualising and preparing over the next months, but that’s about it.”

Evans has been back on his mountain bike since retiring. “Yes, I came into cycling through mountain biking. I stayed away from the trails for most of my road career, but as soon as I stopped competing I started riding off-road again.”

“I have not competed seriously since February 2015. For training reasons, I will try to get some competition in before the Absa Cape Epic.”

Hincapie admits he has no experience racing mountain bikes. “| have always enjoyed riding off-road but have never really raced it, except just with mates at home.”

Neither have ever raced in a team event either.

“Should I be worried?” Evans laughed. “It will be my first time in South Africa. That alone will be a great experience.”

Hincapie has also never visited South Africa, but says it’s always been on his bucket list and that “to do it as a part of this team is very exciting”.

Wingfield promises that the Absa Pride riders will make the visit of Evans and Hincapie “special and memorable”. “We look forward to hosting them and according them a proper Absa Pride welcome with full access to our world class facilities and a premium hospitality experience.”

He added that as part of Absa’s continued partnership with the Absa Cape Epic, the bank will once again recognise and reward teamwork and perseverance at next year’s race with the popular #ConquerAsOne campaign.

“We will be fully supporting Cadel and George as the newest members of our Absa Pride family but wish to assure them that the unity and spirit among all racers will help them dig deep and conquer the eight challenging days – as one,” concluded Wingfield.