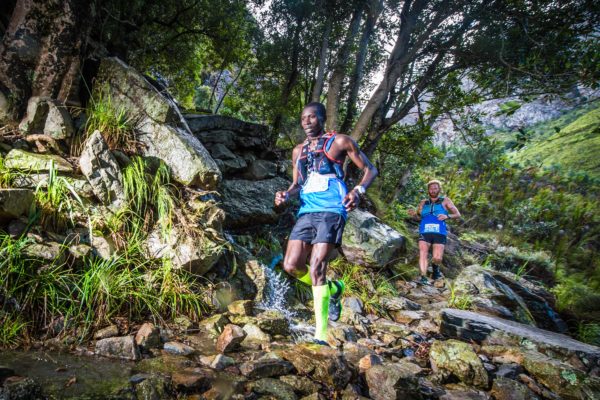 Team K-Way Wintergreen’s Bernard Rukadza and AJ Calitz dominated Stage One of the 10th annual AfricanX Trailrun presented by ASICS at Jonkershoek on Friday, 27 April 2018. Running their 3rd AfricanX Trailrun together as a team, Rukadza and Calitz completed the 33km Stage in a well-deserved time of 02 hours 45 minutes 44 seconds. Nicolette Griffioen and Carla Van Huyssteen of Team KeyHealth Neverest / K-Way crossed the finish line first in the women’s race in a time of 03 hours 25 minutes 31 seconds. The mixed team race was won by Team Crumb’s Daneil Feldmann and Davide del Fante in a time of 03 hours 40 minutes 40 seconds.

Team K-Way Wintergreen’sBernard Rukadza and AJ Calitz dominated Stage One of the 10thannual AfricanX Trailrun presented by ASICS at Jonkershoek on Friday, 27 April 2018.

Running their 3rdAfricanX Trailrun together as a team, Rukadza and Calitz completed the 33km Stage in a well-deserved time of 02 hours 45 minutes 44 seconds.

“The stage was awesome,” said a very happy Rukadza .  “Our plan was to sit with the guys until the top of a big hill and then make our move.  That is what we did.  This is the third time that AJ and I team up for AfricanX.  He’s a great guy.   We understand and learn a lot from each other.  I really enjoy running with him.”

“The game plan was always to keep up with Bernie,” laughs Calitz.  “Everything went according to plan.  We didn’t plan to win the stage though.  I’ve always said that the winners of Stage One never win the race.  I hope I’m wrong this time round.  We took it relatively easy today, so we’re happy going into Stage Two.  It’s great to be back in the mix again in the men’s race.”

“I thoroughly enjoyed today’s stage,” says Griffioen.  “There was more single track than in previous years.  I commend the event organisers on the venue change.   Unfortunately Carla didn’t feel well today.  We just kept pushing and hoped that we could hold onto the lead.  We’ll see what tomorrow holds.”

According to Van Huyssteen, the trails were amazing. “Stage One was a nice, technical trail run.  I battled today though, feeling nauseas from the start.  As a result I just didn’t have the climbing legs.  I am ready to fight another day though.”

The mixed team race was won by Team Crumb’sDaneil Feldmann and Davide del Fante in a time of 03 hours 40 minutes 40 seconds.

“This is my first AfricanX,” admits a very happy Feldmann.  “We met last year when Davide was looking for a running partner to take on AfricanX.  We didn’t take part that year though. We are now partners.  Being able to take part together is really special.”

“The views were amazing today and the weather was perfect,” says del Fante.  “We wanted to do well at AfricanX. Today everything went according to plan.  We ran our own race and kept it steady. We’ll do the same tomorrow.”

The AfricanX Trailrun requires teams of two runners (male/female/mixed) to battle it out on a route that varies in distance between 20km – 36km each day.  Teamwork and endurance is put to the test.

SANET WENTZEL SPIRIT AWARD:  Introduced in memory of a fallen athlete, the ‘Sanet Wentzel Spirit honours AfricanX entrants who persevere irrespective of the adversity that they face.

BEST DRESSED COMPETITION:  Although all three stages of the AfricanX Trailrun are equally special, Stage Two features ‘that extra flair’ with trail runners allowing their creative sides to get the better of them as they try to outdo their rivals in the AfricanX’s “Best Dressed” competition.  With awesome sponsor prizes up for grabs, “Dress Up Day” is sure to be the source of much excitement.