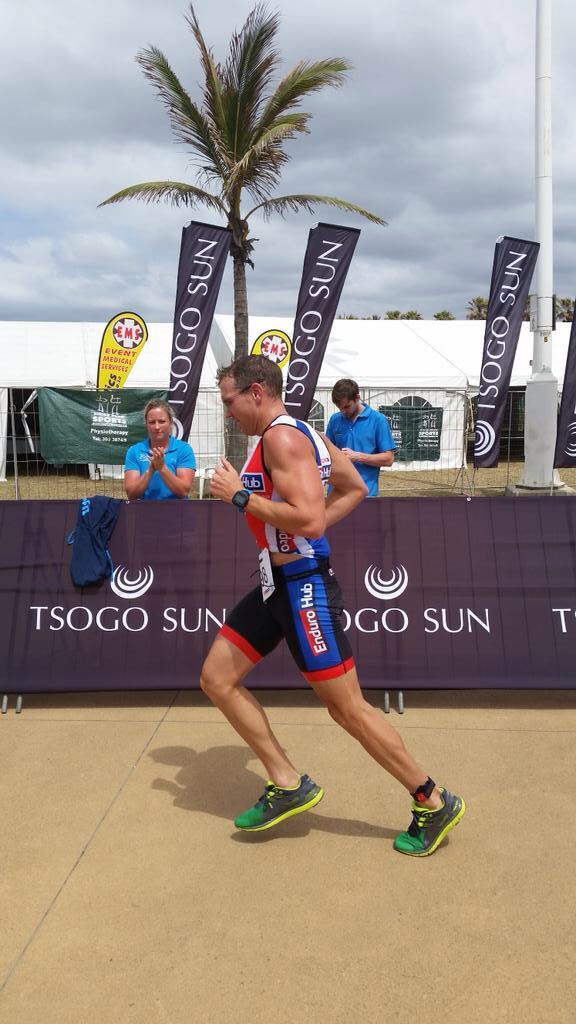 Donavan Geldenhuys on the finish straight

Finally the race I was looking forward to for many months were upon us – TriRock 2014. The 1st 70.3 distance of the year and an excellent time to see if all the winter training was at      least worth it has arrived and I was very excited.

Durban is a lovely place, the weather is awesome almost all year around. Cycling happens in abundance every day from 4 AM and everyone swims in the sea all year around – pretty much Utopia. Arranging a triathlon in this place I speak off must be easy….. until you get to the week before TriRock and the weather gods unleashes all hell with storms, heavy sea’s, rain and extreme wind conditions to name a few. I can just imagine what must have gone through the minds of Grant and his team. This place delivers all the goods all year around, until 5 days before the race and everything is turned on its head. Rumours of cancelled swims, even cancelled races were posted and hummed all week, making things very unclear. 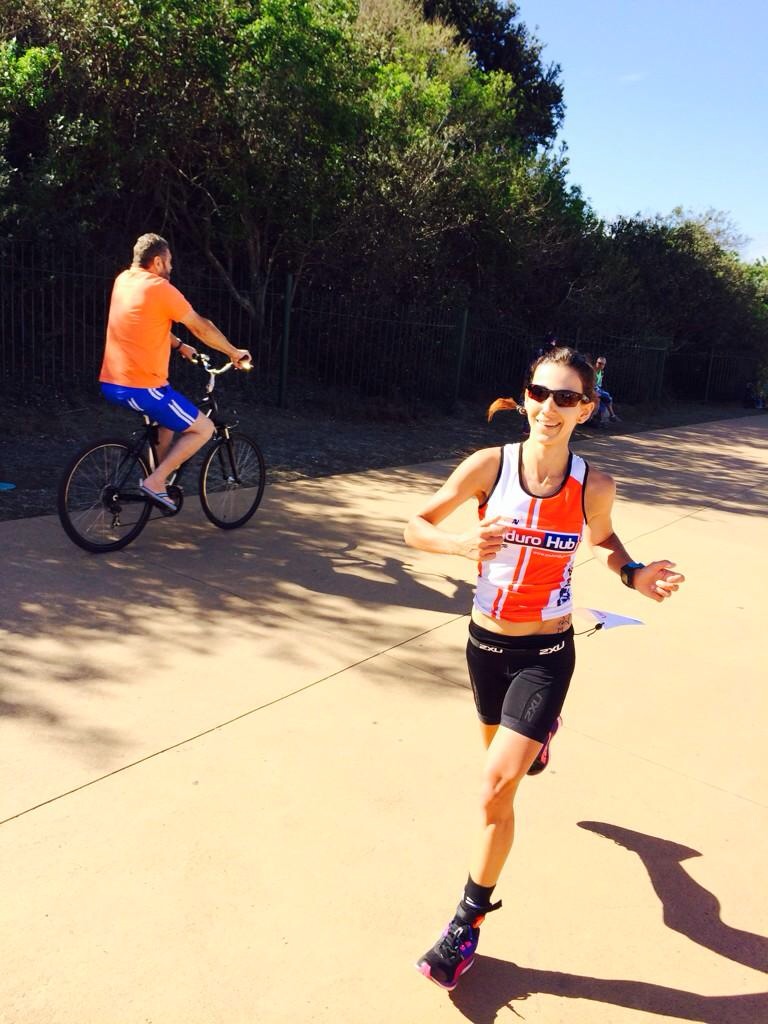 Rozanne Geldenhuys hanging on to her 4th place overall

Friday the 3rd was race registration – this was done at SunCoast Casino in a well organised setup with all well known brands and regular race registration stalls in sight. The registration process was flawless and quick, no que’s, no fuss – in and out. Saturday the 4th was Urban Rock time – this is the “sprint” distance triathlon leg of the Tri Rock weekend. Unfortunately due to heavy seas and the shark nets being removed, the swim was cancelled and the Urban Rock race was turned into a duathlon. I was there to watch my wife race, it seemed awesome and everyone was in high spirits and enjoyed a fantastic day out. Other than the sea being an absolute mess, out on the promenade and on the cycle track were the racing was happening all was well.

Up until around 4 o’clock on Saturday, the format of the longer distance TriRock race was uncertain. It was not clear whether there will be a swim and rumours of the swim venue being changed surfaced and everyone was confused. Luckily race briefing was on Saturday night where all these uncertainties were well explained. Here I must applaud the TriRock management team. The layout of the race changed completely in terms of where the swim will start, where the swim will finish and the run up to T2. This changed was forced upon the TriRock team seeing that the shark nets were only deployed in some areas and they were only allowed to let us swim in these parts of the sea. This change in race layout were very well communicated and I believe these guys went through huge effort to keep the race as a triathlon format. The easy answer would have been changing the race to a duathlon – this would have taken much less thought and much less struggle than what we had in the end, therefore BRAVO to team TriRock for making the race happened.

With all these changes, the race format was now a swim of approx 1,5km with an 800meter transition run to your bike, then the normal 90km bike and 21.1km run.

With the race format understood, it was time to fuel up and sleep before the big show down.

I was one of the lucky ones to be part of TriRock 2013 – at that time I just relocated to Durban and it was my first race in my new home town. TriRock 2013 was an awesome experience, it was my 2nd ever 70.3 distance race and I loved it. The problem with racing the same race year after year, one tends to put pressure on yourself to do better than last year. Any external elements are forgotten – never mind if the wind is stronger, the sea is worse or the heat is extreme, you need to do better than last year. I was trying to convince myself to not look at times, just race the race within the race on the day, but no matter how many times I told myself that, I had an idea in the back of my head of what time I will be chasing all day. To add to my own pressure I was dumb enough to lay a little wager with my coach and eventual winner of TriRock 2014, Donovan van Gelder, on who will have the fasted run split between us on the day. TIP – Never lay a wager with your coach – he is your coach for a reason, he knows your own strengths and weaknesses better than yourself in terms of ability in racing and will only wager you if he knows he can claim the win. He did win the wager and I owe him coffee or bear, not sure yet.

The swim was quite unique. We started down at the UShaka pier, swam about 200meters inwards, turned left and then just headed out along the coast for bit more than a km, then turned to head out onto the beach. The swim start and swim finish was not at the same place, neither was the swim finish close to T2. I measured 1,89km swim then started the 800meter run towards T2 – wetsuit and all. Swim conditions was tuff, I found it very hard to get out of the sea with strong currents and fairly big swell. I got dumped by a couple of waves and drank more sea water than what is prescribed in anyone’s diet, so I was not a happy camper running into T2, but with the leaders, other than Mr. Glen Gore who had about a 3minute lead insight I soon started feeling a little bit better about my miserable start. This sport is very special in that its definitely not only a physical test of ones ability, but most of the time the mental challenge is the hard one. When things don’t go right one loses focus, your body starts feeling tired, the distance to the finish line seems very far, but all you need sometimes is small little indicators that you are actually ok, you didn’t lose too much time and the feeling of being in control returns and one can race hard again. This process of very good, to feeling like crap to feeling average unfortunately occurs a few times during a long distance race and its how we face the challenges that eventually determines the outcome of ones race. I haven’t spoken to many people that said – geez my race went perfect and I felt excellent for the complete 4 hours – other than the winner of course. I recall the race announcer speaking to Gareth Harrington afterwards and asking him about his race ( he came 3rd overall) – his first comments was, Wow – I bled through my eye balls during that run (figuratively off course) – and that’s sometimes the feeling one must overcome to be a good athlete.

The bike course is on my door step, a course I ride most days and knows it back to front. Cycling is my weakest leg by quite some margin, but knowing the course well did give me some confidence to know when to push and how I should be feeling at certain points in the race to know that I will be ok for the run. Its always worthwhile doing a bit of a course recce and knowing what to expect. To me the bike leg was just about survival and not losing to much time and obviously getting to the run in fairly good shape. The leading men were pushing very hard and Donovan van Gelder was putting some serious time into the rest of the field. 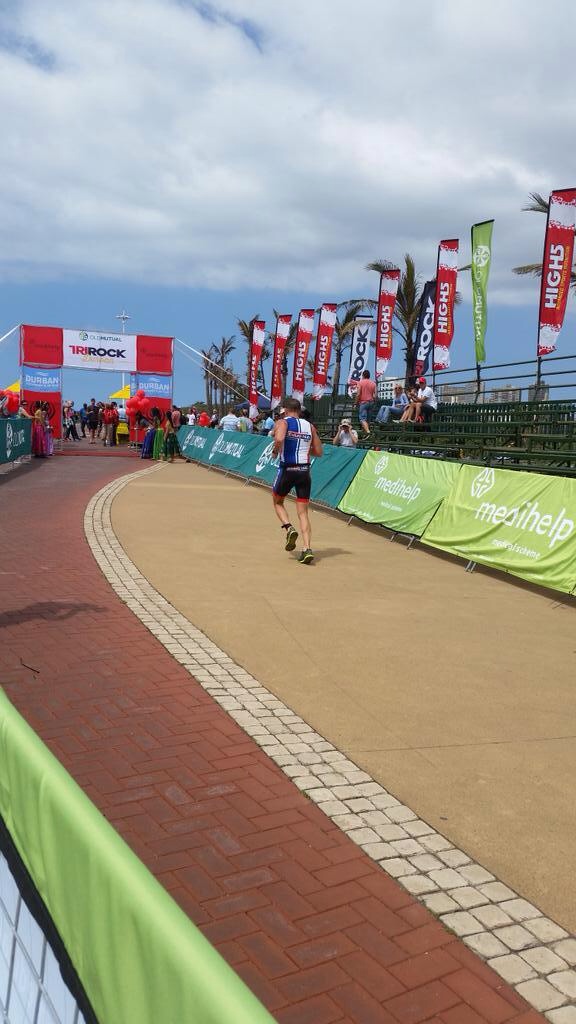 Welcoming sight of the finish line.

The run course is flat, very flat and was always going to be fast. I love the running leg and my goal was to run a 1-22ish half marathon. This is still a bit of the sub 1-20 I want to run one day, but its a step in the right direction. The running leg to me is all about pacing, keeping a steady pace throughout and hoping to real in some of the better bikers. My run went very well, steadily running around the 3-55ish per km and seeing that the run was 3 x 7km loops it was nice to see how the other guys in font is looking and whether the gap is closing. Unfortunately for me the run was short, around 18,5km. I was probably one of few people who was very upset about this – I want the run leg to be long, or at least 21km.

Due to the short run, the overall times were fast, but the changes to the swimming leg did add some time onto the race – the 800m run to T2 was longer than usual and for the average athlete added probably around 5 to 6mins to the overall time.

The race was really well organised and managed. Full road closure on the entire bike leg was amazing and really made everyone feel safe. The prize giving afterwards was quite a show with a big stage, nice photography and loads of prizes. The pro men were really looked after in terms of cash prizes, watches from Garmin, shoe hampers from newton running etc.