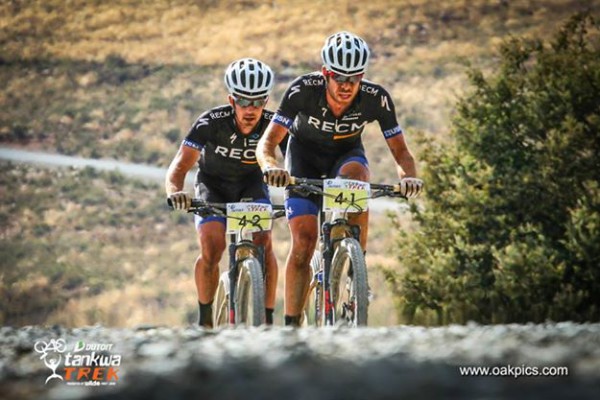 The third stage was over 87km (26km neutral) in the Koue Bokkeveld. Woolcock and Lill won in 2 hours, 14 minutes and 21 seconds. Kleinhans en Reid came in second just a few seconds later in 2:14.32 to secure their overall victory. Gawie Combrink and Johann Rabie (EAI) was third (2:15.20).

“We were looking for the stage victory today. We didn’t want to settle for just finishing second overall especially after the disappointment of the second stage. There was a lot of attacking, but we knew Heartbreak Hill was still coming and when we attacked there we got away. Just very happy to get the first place on the stage,” said Woolcock.

Kleinhans and Reid’s winning time for the three days and 259km (5305m) were 9:28.27. Lill and Woolcock (9:33.37) took second spot and the final place on the winners’ podium went to youngsters Adriaan Louw and Lourens Luus (Contego Pro MTB, 9:44.25). “We came with high expectations so we are very happy with the overall victory,” said Kleinhans. “We had a smooth ride, no problems and we proofed to be a good combination. We were pretty aggressive, but we both are punchy, fast and aggressive riders. It was nice to ride with James. We obviously tried for another stage victory, but Waylon and Darren were really motivated.”

Reid, who also won last year’s Tankwa Trek, added: “It was an eye opener riding a tour with Erik. I did not have the best legs, but his patience made it possible for us to finish with the victory.”

Stefan Sahm (Team Bulls, 9:26.01) was second overall on the stage and victorious for a third straight day to get a dominating overall victory in the solo-category. “I had fun today. To be honest it was too nice a day to race! I had a great time here and really happy to have won.” 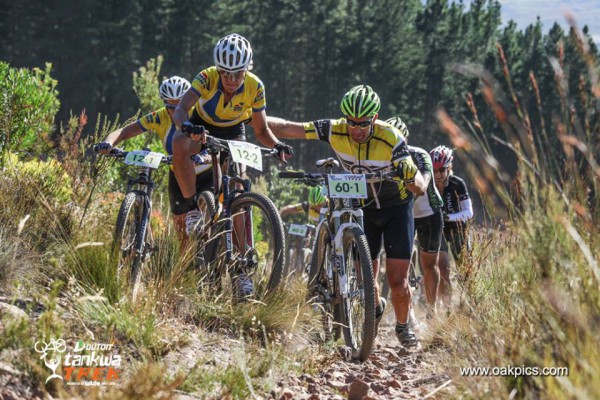 The good nature of the sport. Photo Credit: Oakpics

Jennie Stenerhag and Robyn de Groot (Team Ascendis) also won their third stage for a convincing overall victory in the women’s category. They won the stage in 2:31.02. Cherise Stander and Ariane Kleinhans (RECM, 2:33.45) were second followed by Yolande de Villiers and Bianca Haw (Sasol, 2:36.42) for the third place. “I look and feel so much better today,” said Stenerhag with a big smile. De Groot added: “It was our first team race of the year and to have won it, makes this victory very special. I am really happy to share this experience with Jennie. We are also finally wearing the same kit!” Stenerhag and De Groot’s overall time was 10:53.33. Stander and Kleinhans (11:00.25) were second and De Villiers and Haw (11:31.19) took the final spot on the winners’ podium.

Catherine Williamson (Asrin, 11:16.37) won the solo-category for women. “I had an amazing time and these routes are something special. My technical skills most definitely improved over the three days.”

Craig Boyes and Candice Neethling (Asrin, 11:13.01) won the mixed category even though they finished second on the final stage. Mike Posthumus and Yolande de Villiers won the stage in 2:37.21. “We had some mechanical troubles today, but we just made sure to keep Mike and Yolande in sight. We know that as long as we see them we can still get the overall win,” said Neethling. Boyes added: “It was a great experience; riding with Candice and being part of the Tankwa Trek.”

Henco Rademeyer from Dyland Event Management said that they are really impressed with the rider turnout and that they will open the entries for next year’s event in May. “I have to give special mention to our loyal supporters who without nothing of this would have been possible.”