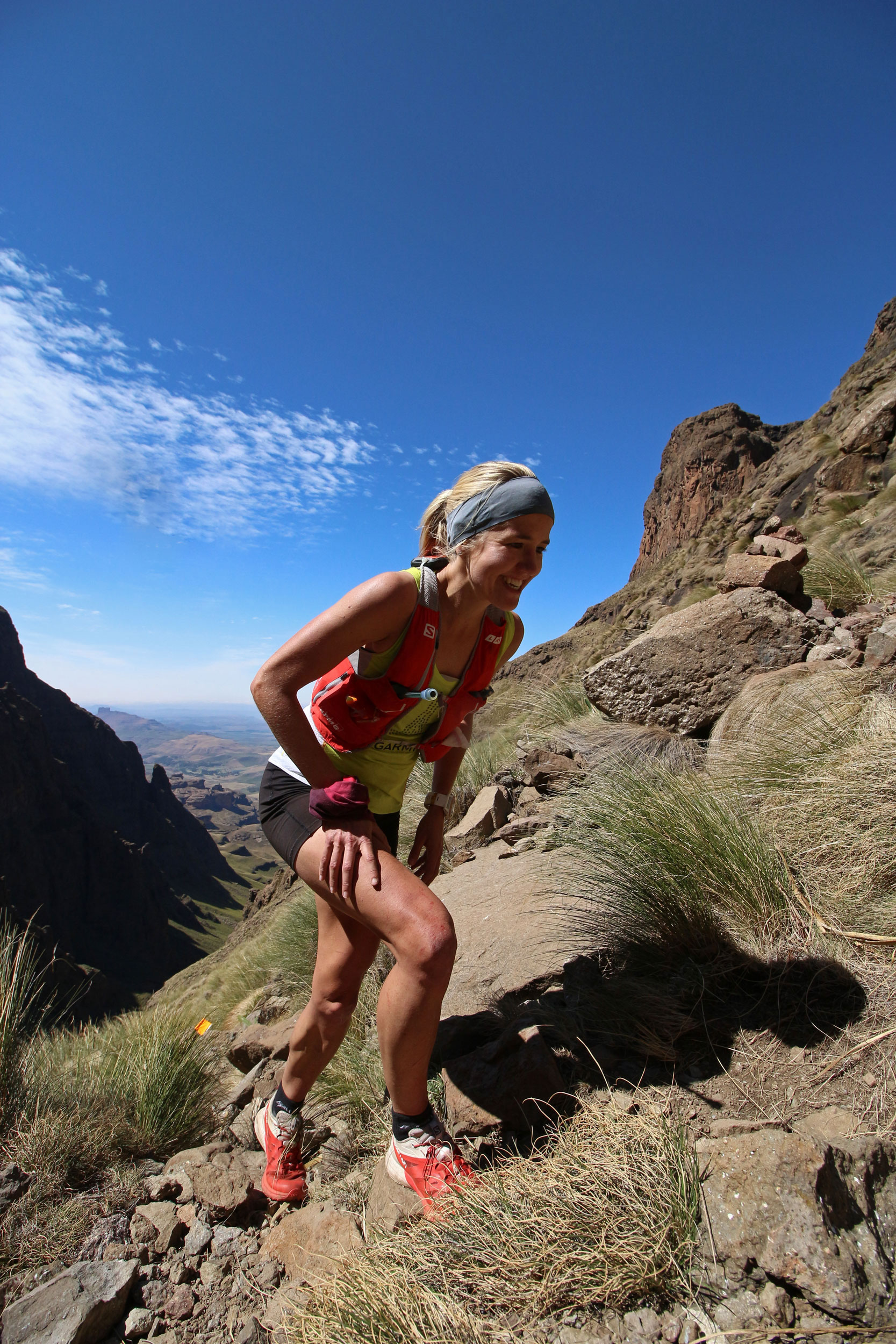 Salomon/KPMG’s Landi Greyling will take on the 62km Giants Cup Uncut as part of her preparations for the Ultra-Trail® Mont Blanc when she takes on the inaugural Ultra-Trail® Drakensberg on Saturday, 29 April.
Anthony Grote/
Gameplan Media

Underberg – The Southern Drakensberg will be the focal point the trail running community this weekend as adventurers descend upon the picturesque Maloti Drakensberg Park which provides the backdrop to the inaugural Ultra-Trail® Drakensberg (UTD).

The event forms part of a greater series of races that take place around the world, including the Ultra-Trail Cape Town, and provides runners who compete in the 100km UTD an opportunity to qualify for the iconic Ultra-Trail® Mont Blanc in France.

Event organisers have given runners of all abilities the opportunity to enjoy the splendour of the Southern Drakensberg with four different races on offer. The flagship event is the 100km UTD, which has attracted some of the country’s top ultra-distance trail athletes.

If 100km is a few steps too far, there is the 62km Giants Cup Uncut. This event follows the Giants Cup trail but will not be taking place over two days like the traditional Giants Cup event.

Down from that is the 30km Sundowner Run. As its name suggests, the Sundowner Run will see runners setting off from Castleburn Farm at 15:30 on Saturday afternoon and enjoying the beautiful sunset the Drakensberg has to offer. The race cut off is set at eight hours which means runners will be getting in before midnight.

The fledgling event has captured the imagination of a number of star athletes, including some athletes that will be competing in foreign colours.

French star Vincent Viet will lead the foreign charge with Spanish runner Pedro Calderon another international competitor that will add to the exciting nature of the event.

From a South African perspective, Jock Green is expected to be heading the pack. The Salomon-sponsored athlete is a veteran of three Ultra-Trail Cape Town races but does not have a lot of experience in the Drakensberg, although he is still eyeing out an overall victory at the event.

With the withdrawal of Nicolette Griffioen from UTD, the spotlight might fall onto Bergville star Tracy Zunckel.

Despite her laid-back attitude towards competing, the mother of three is confident she is in good shape for the event but hasn’t predicted an overall victory, rather highlighting her pursuit of an enjoyable race as her main objective for the 100km journey.

All eyes will be on Landie Geryling during the 62km Giants Cup Uncut as she uses the shorter distance event to help her in her preparation for the Ultra-Trail® Mont Blanc later in the year.

Greyling has eyed the Giants Cup Uncut as the perfect opportunity to get one last good run in before her assault on the tough Mont Blanc event. She has raced often in the Drakensberg and has used an excursion into Lesotho as the perfect excuse to take part in the first edition of UTD.

The event has also included a more relaxed two-day event, the Drakensberg Rock Jumper. This event will see runners tackle 15km each day and return to the Sani Pass Hotel where they will spend the night.

The inaugural Ultra-Trail® Drakensberg will take runners through the iconic Maloti Drakensberg Park; an area that organisers believe is underappreciated. They hope that this event will showcase this pristine landscape of the Drakensberg and play a role in helping people appreciate the area as much as they do.

As with all Running Man Adventures events a significant portion of each entry will be donated to Ezemvelo KZN Wildlife and we are also very pleased to announce that UTD will be partnering with Wildlife Act (www.wildlifeact.com) and assisting them to raise funds and awareness.