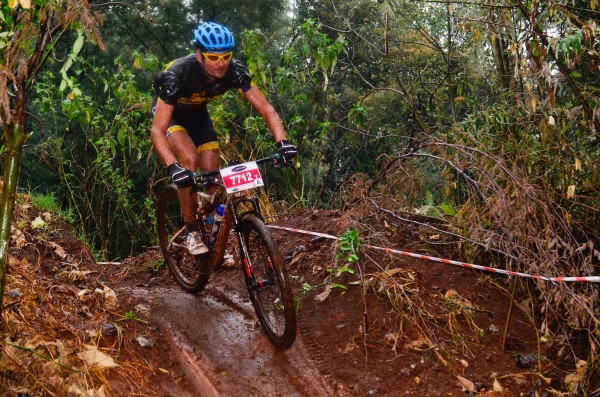 South African sub-veteran marathon champion Henry Uys mastered the wet and slippery riding conditions atop the Krugersdorp Ridge to claim the victory in the Pennypinchers Silverstar MTB Challenge, presented by ASG, on Saturday.

South African sub-veteran marathon champion Henry Uys mastered the wet and slippery riding conditions atop the Krugersdorp Ridge to claim the victory in the Pennypinchers Silverstar MTB Challenge, presented by ASG, on Saturday.

Uys, who rides in the colours of Complete Cyclist, kept his nerve on the three-kilometre finishing descent to take the 40km win in a time of 1:46:41.

Josef Bester followed him into the undercover finish at the casino’s newly built venue, The Globe, in 1:47:21, with Conrad Barnard a distant third in 1:52:33.

Uys said it had definitely not been the easiest of victories, given the mud and intermittent rain throughout the day.

“It would have been a waste of energy to try and tear the legs off the guys today,” he said.

“It was really about riding cautiously and sensibly and maximising the advantage whenever I had one.”

He said, however, that the racing had gotten off to an incredibly fast start as the contenders tried to force an early split going up the Hill Snacks climb.

“As expected, straight out the starting blocks, the guys were on the gas and tore the race to pieces immediately.”

The Radiokop resident said a selection of five riders went over the top together before shedding one of their number as they turned up onto the ridge.

“My lungs were burning in the cold conditions and I was trying to get my legs to wake up and start responding, so I just hung in there and tried to survive,” said Uys.

The quartet stayed together on the rocky downhills and slippery packed clay sections.

“I’ve fallen quite heavily in conditions like this before, so I was very cautious and didn’t get too carried away if I lost a bit of ground on the guys who were just ahead of me.”

With 10km to go, Uys attacked on one of the ascents and whittled the group down to himself, Bester and Barnard.

“I stayed on the gas and then we were down to two.

When Bester went on the offensive and put a couple of metres into him, Uys stayed within touching distance.

“At one stage I went down in a puddle of water and lost about 20 seconds on him and had to chase to catch up again.”

They lost contact once more going over the last climb of the day, with Uys resigned to taking second place at that point.

Then disaster struck Bester as they raced down through the Walter Sisulu National Botanical Gardens and down towards the finish.

“He’d taken as much risk as possible to try and gain the advantage and ended up cutting his tyre somewhere on the descent,” said Uys.

“So I passed him with about a kilometre to go and managed to take the win.”

Having done three or four different editions of the Krugersdorp race, Uys said each of the routes had been technical and testing.

“This new route is a very good one. It’s more a cross-country style one, so I think if it were dry it would have been a whole lot faster and harder than it was today.

“It’s a winning combination that the organisers have here.”

The 32-year-old said the highlights of his season so far had been this victory, his national champion’s jersey and the birth of his first son.