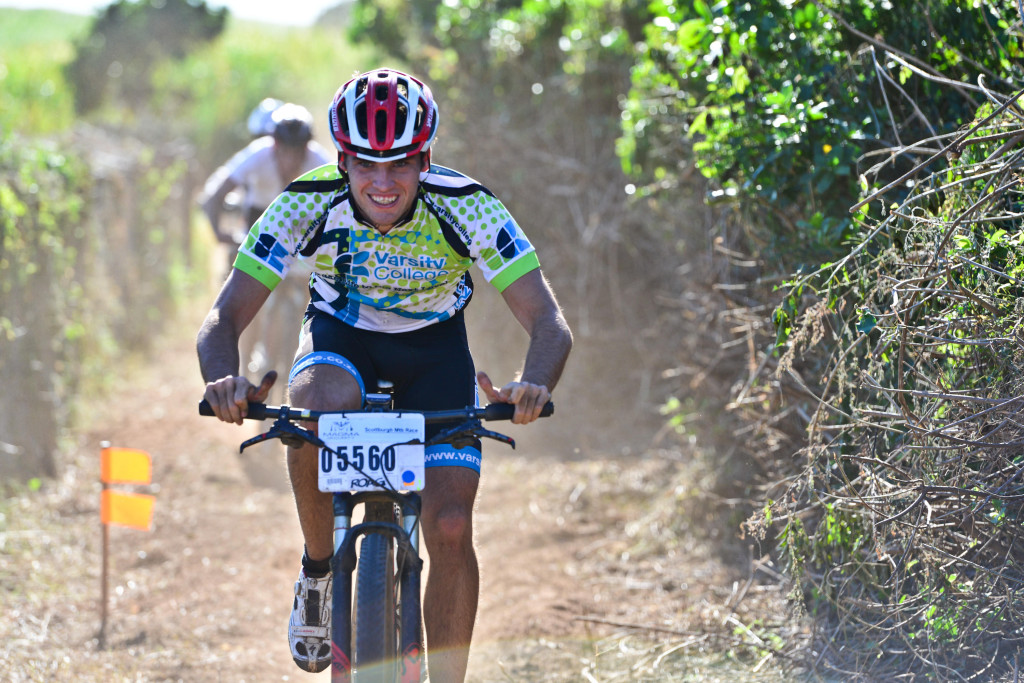 Men’s defending champion Evan van der Spuy (Varsity College) will be hard pressed to defend his men’s title at the Scottburgh MTB Race presented by Sappi on Sunday as the likes of Quattro’s Tyron Bird and Thule’s Tyronne White look to spoil his show.

Scottburgh – Both men’s and women’s race defending champions will feature on the start line on the KwaZulu-Natal South Coast beach as part of a big field of mountain bike enthusiasts for the Scottburgh MTB Race presented by Sappi, with Evan der Spuy and Hayley Smith desperate to overcome the notorious ‘curse of the defending champ’.

Varsity College’s van der Spuy and his women’s compatriot – Bell Equipment’s Smith – are both eager to take to the Scottburgh start line once more this weekend, with Smith in particular facing a very real opportunity to make it two in a row at her local event however if either are to achieve the feat they will have to make history to do so as no previous winner – male or female – has ever successfully defended their title previously.

Smith, the more likely of the two returning titleholders to end the plaguing trend, is likely to see her nearest threat in the women’s encounter come from Mr Price Cycling’s Isabel Moolman however the 20-year-old Margate resident’s local knowledge may well prove significant in her title defence efforts.

In the men’s race van der Spuy will be hard pressed in his title challenge this time around as the likes of Quattro’s Tyron Bird, Thule’s Tyronne White and Mr Price Cycling’s Werner Moolman all look to clinch a podium finish in 2014.

Kokstad’s Bird will hope to build on his solid fifth place effort at the hotly contested aQuellé Tour de Krantz recently while the North Coast’s White will be solely eyeing the top step of the podium from his rare South Coast appearance. Together, the pair represent the most likely source of this year’s Scottburgh MTB Race victor.

Having previously been staged over the weekend of the winter solstice, the event’s new slot on the calendar – just a day before the southern hemisphere welcomes in spring – may well see participants face a very different set of weather conditions to what they have experienced in previous editions.

Snow predictions for the Western and Eastern Cape as well as sections of the Drakensberg this weekend, as well as this time of year renowned for strong gusts of wind, participants are likely to be a little more rugged up on the start line than in years gone by.

Minor tweaks to the popular route, the usual magnificent South Coast scenery, another short dash through CrocWorld and the breath-taking finish on Scottburgh’s main beach will however be fond familiar aspects of the event which return again in 2014.

The event’s sizeable field naturally enjoys a strong South Coast flavour with riders from Amanzimtoti, Hibberdene, Margate, Port Shepstone, Scottburgh, Southbroom and Umkomaas having already secured their place in this year’s event while the race’s popularity has also stretched throughout KZN and beyond with the provinces of the Western Cape, Eastern Cape and Gauteng also enjoying representation this time around.

The feature event is the 45km Classic which will offer riders a good test with great reward however plenty are busy readying themselves for the popular 28km Intermediate and 10km Fun Rides.