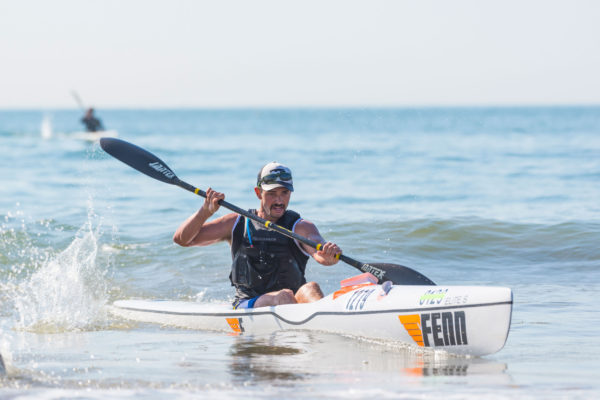 In what appeared to be a very different men’s field from the usual Bay Union Surfski Series races, Brandon van der Walt returned to KwaZulu-Natal on a spontaneous trip to take the overall honours ahead of marathon racing star Andy Birkett in second and the young Hamish Lovemore in third.

In the men’s race it was always going to be a competitive field with the likes of Matt Bouman, Van der Walt’s brother Grant and Wade Krieger on the start line and with defending champion Hank McGregor absent the title chase was definitely going to be a tough one.

A spontaneous trip to Durban meant that Nelo Surfski/Jantext Paddles’ van der Walt threw his name into the King of the Bay ring. With such a competitive field in such flat conditions made the victory slightly sweeter for Van der Walt.

“It was nice to see the flat water guys out there on Sunday,” winner Van der Walt mentioned.

“The conditions were perfect for them and Alex Masina pulled for the first two kilometres at a good pace showing he’s in good form ahead of the junior world sprint champs.

“Matt Bouman pulled us all the way to the turn can once we had got out of the harbour and then Hamish Lovemore put in a good pull and then Andy pulled well after that.”

With three kilometres go to Van der Walt saw his chance to take advantage of the fact that the others were hesitant to take up the workload on the front of the bunch.

“I decided that I will take up the pull and I thought that it was going to be a good opportunity for me to get on the podium.

“Andy then challenged me with about 500m to go and got ahead right up to the beach but fumbled picking up his boat,” Van der Walt continued.

“I just got out the boat, grabbed the foot strap and bolted up the beach and managed to pip the Dusi champion to the line!”

The benign conditions gave the flat-water specialists a fighting chance and Olympic bronze medallist Bridgitte Hartley took advantage of the flat water off the East Coast of South Africa to take a maiden King of the Bay title.

“It was a really awesome race to do!” the Euro Steel star mentioned.

“I have never done the race before so it was a great experience and to win on my first attempt against a strong field was great.

“Hayley (Nixon) was really strong today and she was willing to take up most of the pull through the harbour.

“She also picked a great line so I followed her when we got out to sea. It was a great contest and I think I only managed to get away from her in the last two kilometres.”

Hartley had her work cut out for her throughout but after she put a bit of pressure on Nixon she was able to get ahead and take a deserving victory.

“I am not sure whether Hayley got tired because I thought she was holding back a bit towards the end but after I got my nose in front I managed to pull ahead.

“Hayley paddled really well and the race was a great contest,” she added.

The race for third was an exciting affair as young Kyeta Purchase and Jenna Ward had a sprint up the beach, a race that was won by Purchase.

In the doubles action it was Jason Ekstrand and Callam Davis took the overall honours ahead of Donna Tutton and Shaun Bergin with Bruce and Juston Wenke coming home in third.

The short course also provided an exciting finish with Joshua Giddings pipping Irvin Dixon to the line to take the honours with Steve Evans and Greg Bennett finishing in third.

Kimon dos Santos was the fastest stand-up paddleboarder in the race as he beat off race one winner Matt Swemmer whilst it was Shayne Chipps who finished in third.

Tagged with: Bay Union King of the Bay featured