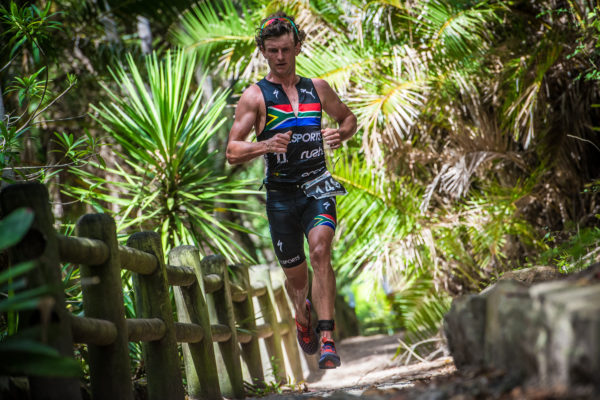 Bradley Weiss and Johandri Leicester dominated the field at the Fedhealth XTERRA in Nelson Mandela Bay on Saturday, 11 February 2017.

Staging his comeback from injury, Weiss proved to be in a league of his own completing the 1.5km ocean swim, 28km MTB discipline and 12km trail run in a combined time of 02 hours 02 seconds.

“I wasn’t sure if I’d make the start today. My doctor actually advised me not to race, but I wasn’t going to stay away any longer,” says an adamant Weiss. “I felt amazing today. It seems that the long rest period did me good. The XTERRA Nelson Mandela Bay course is becoming one of my favourite courses. It features a lot of single track and is pure mountain biking. Racing against Stuart today was really special, while having Conrad Stoltz out in the field was also pretty cool. Today was a good test before XTERRA Grabouw. It was nice to get the feeling of racing again.”

According to Marais, who came second on the day, Bradley Weiss was driving the pace on the mountain bike discipline. “The swim was hard. Brad and I exited the water together behind Keegan Cooke and Theo Blignaut. We jumped onto the bikes at the same time, but I lost Brad’s wheel at a river crossing. I decided to ride smoothly instead of fast. From there Brad lead for the rest of the race. XTERRA Nelson Mandela Bay’s ocean swim is fantastic. The mountain bike course is technical, a real cross country style course. The run is cool. It’s fast, there are climbs and sand. Next up is the Fedhealth XTERRA Grabouw, it’s the grail of XTERRAs. I feel good. Anything can happen at this event.” Theo Blignaut rounded off the podium on the day.

Johandri Leicester’s finishing time of 02 hours 38 minutes 20 seconds secured her the top spot on the podium in the women’s race. “Today was tough,” says Leicester. “I misjudged the swim, but managed to catch a wave on my way out. I completed the mountain bike discipline slower than in 2016, but there was more sand this year so that is understandable. I just took it easy. Overall I had a good race. I really like the ocean swim and technical mountain biking.” Alexia Loizou came in second, while Tracey Campbell finished third.

Says Jeremy Yatt, Principal Officer of Fedhealth: “The Fedhealth XTERRA Nelson Mandela Bay Full event brings seasoned off-road triathletes a wonderfully unique course that features the ocean and beach, parts of the city and challenging off-road trails. It’s the perfect event for proving one’s endurance and technical ability, with the added bonus that the whole family can join in the fun and participate in the other events as well.”

NEXT UP in Nelson Mandela Bay:

LATE ENTRIES for both events will be accepted on the day!

Next on the Fedhealth XTERRA SA Calendar:

For further information or to enter the Fedhealth XTERRA Buffelspoort, Nelson Mandela Bay or Grabouw contact 082 991 0045 or visit www.stillwatersports.com