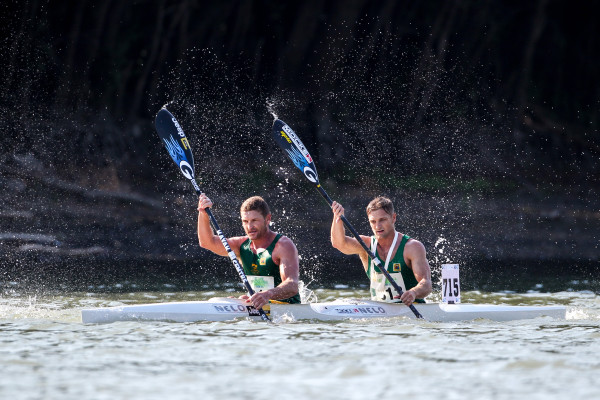 The upcoming two and a half weeks leading into the 2015 Hansa Fish River Canoe Marathon is a helter-skelter period for five0time defending K2 champion Hank McGregor who, along with partner Jasper Mocké, jets off to Tahiti for the ICF Ocean Racing World Champs only to return the week of the two-day spectacle from Grassridge Dam to Cradock Sports Ground from 9-10 October. Balint Vekassy/
Gameplan Media

Cradock – With just over two weeks to go until the 2015 Hansa Fish River Canoe Marathon five-time defending K2 champion Hank McGregor will travel just over 30 000km as he heads to the Pacific island of Tahiti for the ICF Ocean Racing World Championships then jets back in the nick of time for the two-day SA K2 championships in Cradock starting from 9-10 October.

The trip to Tahiti comes off the back of his triumphant return from the ICF Canoe Marathon World Championships in Győr, Hungary where he won the K1 title and finished second in the K2 race with Hansa Fish partner Jasper Mocké however with an excruciating journey ahead of him McGregor is maintaining a narrow focus.

“I am not trying to think too far ahead to be honest,” the Team Jeep/Kayak Centre star mentioned. “I am going to take it one race at a time because you never know what could happen between now and the Fish.

“I just want to travel safely and make sure that when I get back I am not sick and neither is my partner so we can have a good crack at the Fish however I still have to race against Jasper at World Surfski Champs so we not looking past that at the moment!”

With the flat water marathon events behind him McGregor’s focus shift is a fairly drastic one however the 37 year old feels that it is exciting considering the events have all be so close together.

“I am super excited about the races that are coming up. I’ve gone from flat water marathon racing to ocean racing and then will be heading back to river marathon racing which are three totally different events!

“I can’t say for sure how I think we are going to do at Fish but we will make sure that we are in as best a shape as we can be in when we get to the start,” he added cautiously.

With the incredible distance comes the threat of jet lag and being able to conquer that in the short turn-around between arriving back in the country and the start of the Hansa Fish at Grassridge Dam is another challenge that will confront McGregor and Mocké.

“As always I am looking forward to the Fish; it’s just going to be a case of trying to stay awake during the race!” McGregor quipped. “The race doesn’t dish up any surprises so we are not too worried even though we won’t have time to prepare when we get back.”

With a World Marathon Championship gold and a silver medal as well as a Dusi Canoe Marathon silver to their name the combination of McGregor and Mocké is a strong one and will be a difficult challenge for the pretenders to the Hansa Fish thrown and with five K2 titles to his name McGregor is aware that six will be unprecedented.

“Jasper and I have formed a great combination over the years as we are like minded paddlers and we always seem to go well together.

“We don’t train a lot together with him being in Cape Town and me in Durban.

“We both love to win and that is something that we know makes us a good combination,” added McGregor.

The five time K2 champion of the Hansa Fish understands the pressure that will be on him and Mocké when they reach Cradock however he has singled out a few crews that will be the ones that they are going to have to watch out for during the race.

“Andrew (Birkett) and Greg (Louw) are the defending SA K2 champions and were with us at the World Marathon Championships so they will definitely be a crew that will be contending as well as guys like Tom Schilperoot and Dawid Mocké – who will put up their hands for a shot at an end sprint.

“Brandon van der Walt and Stu Maclaren have also been going well and will be another boat that we are going to have to watch closely!” a wary McGregor concluded before jetting off to Tahiti.