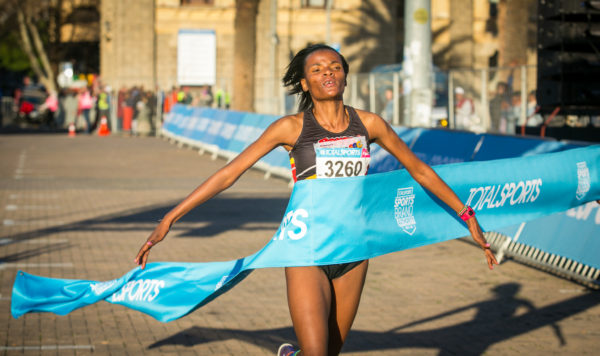 Johannesburg & Cape Town – The streets of Johannesburg and Cape Town were painted pink on National Women’s Day (Wednesday, 09 August 2017) with just over 17 500 eager runners and walkers joining forces to #RunForLife in support of PinkDrive at the 16th annual Totalsports Women’s Race.

In Johannesburg, Irvette van Zyl dominated the 10km race claiming gold at the Mary Fitzgerald Square, Newtown in a deserving time of 34 minutes 09 seconds. “I didn’t really have a plan today, I just wanted to run fast,” says a very happy van Zyl. “Although I led from the start, I knew that the other runners weren’t far behind so I couldn’t slack down. The route wasn’t fast and flat as expected, but the vibe was great and the event was well organised. I had a great race. A month ago, having come back from injury, I didn’t think that I’d be running this time again soon. I am impressed with my performance and of course it’s always nice to win.” Glenrose Xaba came in second, while Maria Shai finished third.

After completing either the 5km or 10km Totalsports Women’s Race in Johannesburg, entrants were treated to a lively performance from South African hip hop record producer and musician, Anatii.

In Cape Town Lebogang Phalula was the lady to beat in the 10km Totalsports Women’s Race crossing the finish line first at Grand Parade in an impressive 34 minutes 21 seconds. According to Phalula, she desperately wanted to take part in the Cape Town race. “I told myself that I had to win today,” says Phalula. “Nolene and Zintle went out strong. I knew that I had to relax and did not push too hard at the start. I took the lead at round about the 3km mark. Coming from Johannesburg, I didn’t think that anyone would know me here but everywhere on the route there were people cheering and shouting my name. It was such a nice surprise. I love running in Cape Town. The vibe and support at the Totalsports Women’s Race is amazing.” Nolene Conrad came in second, while Zintle Xiniwe finished third.

After the race Capetonians got to unwind while enjoying a spectacular performance by one of SA’s most prominent music producers and DJs, Sketchy Bongo.

The 2017 Totalsports Women’s Race (Durban, Johannesburg and Cape Town) boasted with an impressive combined prize purse of R123 600, with each event being allocated a total of R41 200. The top eight finishers in the open and junior categories were awarded prize money, with the open winner taking home R10 000. Prize money was also allocated to the top three finishers in the age group categories 40-49, 50-59, 60-69 and 70+.

Charity Support: The Totalsports Women’s Race proudly supports PinkDrive, a Non-Profit Company (NPC) that is committed to improving breast cancer awareness, education, and providing and offering free services to the medically uninsured across South Africa. PinkDrive was present at the Totalsports Women’s Race both in Johannesburg and Cape Town offering FREE clinical breast examinations and educating on the importance of self- breast examinations.

For further information on the Totalsports Women’s Race visit www.totalsportswomensrace.com