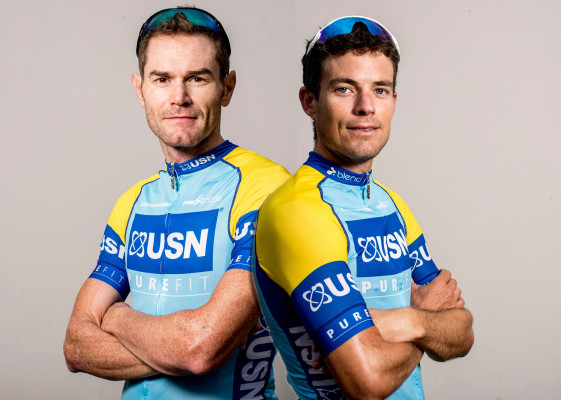 The USN Purefit duo of Waylon Woolcock (left) and Darren Lill (right) will be put under pressure as they look to retain their title at the 2016 KAP sani2c starting from 12-14 May. Supplied/
Gameplan Media

Himeville – After their tumultuous build-up to the 2015 race, the defending champion pair of Waylon Woolcock and Darren Lill are in a far better space going into the 2016 KAP sani2c which should sound the warning sirens for the rest of the elite field contesting the iconic race from 12-14 May.

Having been without a sponsor leading into the 2015 edition of the popular three-day journey from Underberg to Scottburgh the USN Purefit pair had added motivation however Woolcock believes that following a successful ABSA Cape Epic – where they finished as the top African team – they are in a much better space this year.

“We have been a lot more relaxed post-Epic this year,” Woolcock mentioned. “Last year we were doing odds and ends just to make ends meet and despite the added motivation I think that we are a lot more focused on the job at hand this year.

“Our preparation will include the South African Marathon Championships next weekend and then we will be focusing completely on sani2c.

“With its shorter, sharper stages you need to be fully committed and prepared which we hope we will be when the race starts,” a focused Woolcock revealed.

The Western Cape pair have been riding together for three years which makes them a formidable and experienced combination but having the same motivation and being driven by the same desire means that they have a unique bond.

“We are very like-minded people, Darren and I. We have done three Epic’s together and two sani’s which means that we have gotten to know each other really well and we are very self-motivated, we don’t need people on us to tell us what to do.

“We go into every race with the same vision and we don’t want to let each other down which is something that keeps us motivated,” he added.

With the successful showing at the Epic behind them Woolcock understands the rigours of the event as well as its influence on form going into a busy mid-year schedule for a lot of riders.

“The Epic is a completely different kind of monster! You might feel top of the world one day and the next you could be on your hands and knees so we understand the sort of pressures that come with it.

“With that said I think that the Epic is always pennies in the bank and can only count for us going into sani2c.

“We won’t be doing the Old Mutual joberg2c this year because I’ve done the Epic, joberg2c and sani2c before and it is just a bit too much!

“There are a lot of our rivals doing the joberg2c this year so hopefully by giving it a miss we will have a bit of an advantage in terms of preparation for sani,” Woolcock explained.

With a 15 year professional riding career Woolcock has seen and experienced a lot in terms of racing and despite the favourites and defending champions tag being bandied around he does not approach the race any differently.

“We just want to get on the start line and focus on the days racing with our aim being to win and ride as well as we can.

“You are only as good as your last race and you don’t want to think too far ahead of yourself and just get the job done.

“Having a new sponsor on board means that we are also under a different sort of pressure but we want to embrace it and use it to our advantage,” a positive Woolcock concluded.