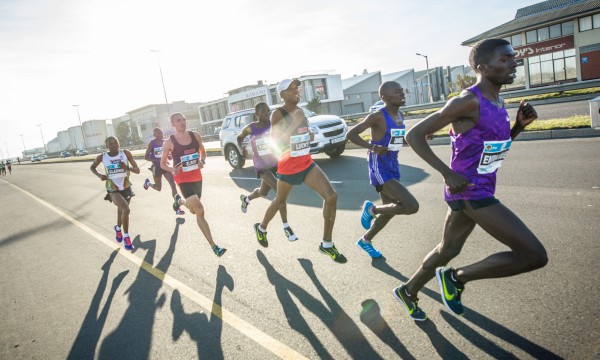 The prospect of seeing Stephen Mokoka and Elroy Gelant take on Emmanuel Bett, Daniel Salel and Timonthy Toroitich in the FNB Cape Town 12 ONERUN on Sunday 15 May, is a riveting one. There will however be more at stake than merely making sure that it is a South African on top of the podium – the question of who is South African King of the road will also be answered. Seen here: Elroy Gelant, Timonthy Toroitich, Daniel Salel and Emmanuel Bett in action at the 2015 FNB Cape Town 12 ONERUN. Photo Credit: Tobias Ginsberg

Thirty-three minutes, 31 seconds is the time to beat on Sunday, 15 May when the likes of Stephen Mokoka and Elroy Gelant take on Emmanuel Bett, Daniel Salel and Timothy Toroitich at the FNB Cape Town 12 ONERUN.

Thirty-three minutes, 31 seconds is the official World Best time ever recorded over the 12km and was set by Joseph Kimani from Kenya as far back as 1997. In 2015, Emmanuel Bett and Daniel Salel were one second off the time after going toe to toe in the inaugural FNB Cape Town 12 ONERUN. Neither Bett nor Salel could get any advantage as the lead changed three times in the final kilometre on Bree Street in Cape Town. In the end Bett was awarded the win with both credited with a 33:32 time.

It was a clean sweep for the foreign contingent as Timothy Toroitich claimed the final podium position. Those podium positions are under serious threat in 2016 as Stephen Mokoka has entered the fray, as has first South African home from last year, Elroy Gelant, who is in scintillating form.

Mokoka set the South African record over 10km in 2015, clocking 27:38 in the Great Manchester Run where he finished second. In so doing, he took 22 seconds off the record set by Matthews ‘Loop n Val’ Motshwarateu in 1980. His form of late has also been exceptional and there is every reason to believe he can break the World Best if needed to win the race; and Mokoka does not want to see the Kenyans take the laurels again.

Mokoka has opted out of racing in the marathon in Rio and will focus on the 5 000m and 10 000m which means he will be racing on fresh legs come 15 May.

Gelant too is in great form after having beaten Mokoka to the national 10km title in February and set an Olympic Qualifier in the 5 000m on 11 March this year.

After his win in 2015, Bett was thoroughly disgusted to not have taken the World’s Best and announced straight after the race that he would be back in 2016 to challenge the time. This makes for a mouth-watering prospect come race day.