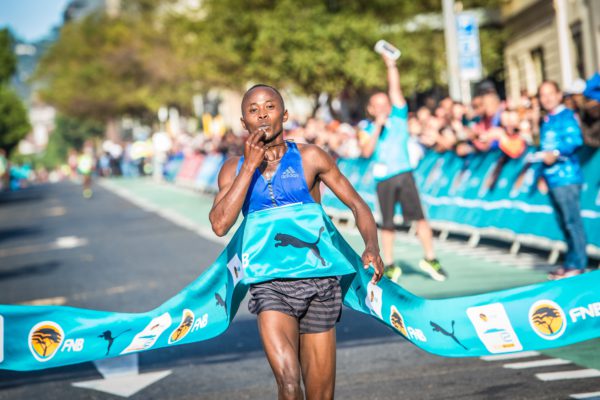 Morris Gachaga of Kenya will be back in action, this time at the inaugural FNB Durban 10K CITYSURFRUN, on Sunday, 08 October 2017. Gachaga ran the fastest time ever for 12km earlier this year when he won the 2017 FNB Cape Town 12 ONERUN.

The announcement was made on Tuesday morning 12 September, barely a week after the organisers made it known that the World Championships 10 000m Silver Medallist, Joshua Cheptegei of Uganda had been secured for Durban, along with South Africa’s 10km Record Holder, Stephen Mokoka.

The announcement of Gachaga’s entry re-emphasizes the organiser’s desire to see the world’s fastest time over the 10km distance for 2017. That time was lowered from 27:18, run by Bernard Kimeli of Kenya in April this year, to 27:10 on Saturday 09 September 2017 in Prague by the same athlete.

“I cannot wait to come back to South Africa. The last time I was here I ran a world best time. Maybe South Africa is a good hunting ground for me. Hopefully I can do it in the 10km too,” said Gachaga from Kenya.

“We have worked very hard since Cape Town,” said Gachaga’s coach, Bruce Lahti. “Since his run at the FNB Cape Town 12 ONERUN, Morris (Gachaga) has been brimming with confidence and really believes that he can do something special in Durban.”

“It is good to hear that Joshua (Cheptegei) is running with us in Durban. With him in the field you know the race will be tough. You also know that he will make sure it is a fast race,” said Gachaga.

With both Gachaga and Cheptegei in the field there is a strong possibility that the world’s fastest time of 27:10 for 2017, could fall. Gachaga ran 27:27 in Casablanca in 2016 and Cheptegei was clocked at 26:49.94 in winning his silver medal at the World Championships in London this over the 10 000m.

Cheptegei and Gachaga are, however, not the only athletes to enter the fray. Another Ugandan, Stephen Kissa has been added to the field as has 23-year-old Philemon Cheboi. Kissa boasts a best of 28:28 for the 10km when he finished third in the TCS Bangalore 10km Road Race, while Cheboi is not far off the 28min barrier having clocked 28:05 in Berlin in 2015.

According to Gachaga, this line up will keep the race “honest”. Gachaga says that with Cheptegai, Kissa and Cheboi in the line-up, the race will not be a tactical one. “They all like to run fast and hard. Together with South Africa’s Stephen Mokoka, we know there can be no sitting back. We will have to run hard from the start.”

Another big name to look out for on the day will be Lesotho’s Namakoe Nkhasi. Speaking from his training ground in Soweto, Namakoe is looking forward to Durban. “These guys race fast. Since I’ve started racing against them, my times have improved. I finished second behind Morris (Gachaga) at the FNB Cape Town 12 ONERUN. I had to run really hard to stay with him. With Morris (Gachaga), Joshua (Cheptegai) and Philemon (Cheboi) in the field, I know that the race will be hard and fast.”

Bringing some of the best athletes in the World to South Africa has certainly caused a stir in the road running fraternity. According to KZN Athletics President, Sello Mokoena, having such an impressive line-up will both benefit the sport, and solidify Durban’s place as a sporting Mecca in South Africa.

“We have waited a long time for something like this to come to South Africa,” says Mokoena. “Joshua Cheptegei, Morris Gachaga and Stephen Kissa – these names will put Durban on the international map of road running. Being able to see this kind of talent on our shores can only inspire our next generation of athletes. We are very excited to be hosting this event.”

Iconic landmarks to look out for on the FNB Durban 10K CITYSURFRUN route will include: the Moses Mabhida Stadium, City Hall and the Durban Railway Station to mention just a few.

Charity Support: When entering online, runners can choose to support The Reach For A Dream Foundation, TREE and/or the SPCA Durban.

FNB Business is proud to be the title sponsor of the FNB Durban 10K CITYSURFRUN. This 10km road running race seeks to bring experienced and novice runners from the city of Durban and surrounds together, through the common goal of road-running, recreation, sports and fun. This sponsorship forms part of our ongoing strategy to support local and community events that focus on a healthy lifestyle, family involvement and impact the communities they operate in positively. It allows us to engage with our clients and the broader community through the memorable experience created by the event. At the core of our strategy is to also support an event like this that contributes towards the rejuvenation, cleaning and revival of the city-center.  As a proudly South African bank, we are proud to be part of a run that celebrates everything about the city of Durban and its diverse cultures.