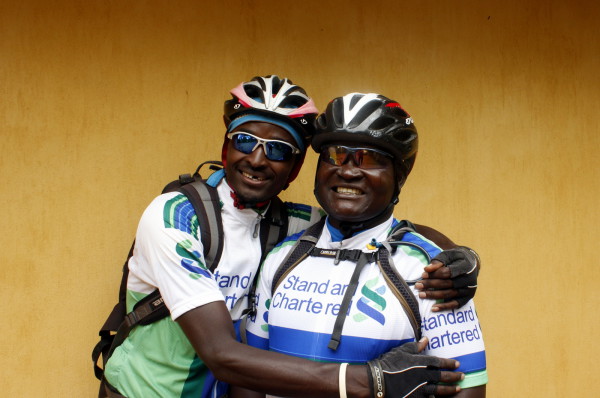 Over 100 foreign mountain bikers from 20 countries will be among the field of 800 for a nine-day tour across South Africa, the Old Mutual joBerg2c, which starts just outside Johannesburg on April 24.

The countries most represented in the international contingent are Switzerland, the Netherlands and United Kingdom, followed by the United States of America, Belgium and Australia.

According to race organiser Craig Wapnick, there will be a dice upfront among the pro field but for most it will be an eye-opening ride across South Africa.

“This is a ride that literally changes lives,” said Wapnick.

“Aside from having the ride of your life through this amazing country, many people also ride to raise money and awareness for causes that are close to their hearts.

“There are many courageous human beings who will ride the Old Mutual joBerg2c.”

Leading by example, he said, were the continent’s own African adventurers Douglas Sidialo and Sibusiso Vilane.

Kenyan Sidialo was blinded in the US Embassy bombing in Nairobi in 1998, which left 250 people dead and thousands injured.

Determined not to let the loss of his sight set him back, he became the first blind African to summit Mount Kilimanjaro’s Uhuru Peak in 2005 and two years later completed the Tour d’Afrique bicycle ride from Cairo to Cape Town.

With a few mountain bike stage races under his belt, Sidialo is now aiming to be the first blind person to complete the Old Mutual joBerg2c and inspire others to overcome their personal challenges.

The 45-year-old will ride on a tandem piloted by his friend and Team Seeing is Believing partner John Mwangi, 20, who is also a former junior national champion.

South African Vilane – who has trekked to both the north and south poles and is the first black African to summit Mount Everest and the highest peaks on all seven continents – will ride in his capacity as a global ambassador of the 46664 Mandela Day Bangle Project.

The Mandela Day library project, which is supported by riders under the Participate for Good fundraising initiative, has already seen R1.4 million raised and seven container libraries established at rural schools along the route.

According to project CEO Robert Coutts, the libraries had already had a major impact on literacy ratios in those communities.

“There are a core group of dedicated riders doing huge amounts of work and we hope to expand their efforts to more of the field.”

Coutts said education and children’s literacy programmes resonated particularly strongly with Vilane, as he came from an impoverished background and had only started his own schooling at the age of 10.

Wapnick said the race was proud to have been involved with a range of community upliftment initiatives such as these since its inception six years ago.

“This event is about more than yourself and many of our participants are doing great things.”

He said the race had been fully subscribed since early January.

“We’re still fielding enquiries and would be able to assist prospective participants should slots become available through unforseen withdrawals.