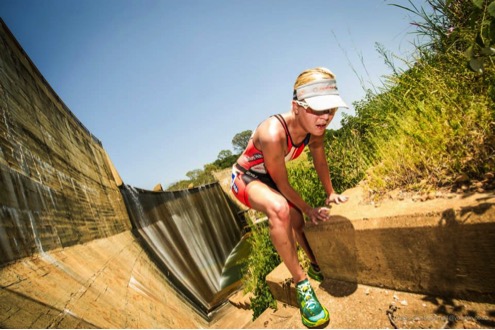 The dam wall and concrete blocks in question

Race reports can get a little tedious. After all, every race that I do consists of the same elements and sometimes there can be little to set apart one triathlon from the next.

Before the race someone asked me if doing a triathlon ever becomes second nature. He was watching me fret the night before the race, running around looking for gels, electrical tape, my post-race golf shirt and countless other things. The short answer is no. The first reason being that triathlon comprises three different sports. Three different sets of required gear.

The second reason is that I don’t actually get to race that often. I do pretty much every triathlon on the Western Province calendar, but I only managed to do 13 multisport events last year. A cyclist or a runner has race options pretty much every weekend. I last did a triathlon at the beginning of November. This was almost three months later and I couldn’t find my PowerTap running visor. Oh and add to the mix that I am totally “A-type”. Straight lines, black and white, yes and no, right and wrong. It must all be perfect. I try keep it a secret that I walk back to my car twice to check that I locked it (of course I locked it) and drive around the block to check that I closed the garage door (of course I closed it). So maybe a little obsessive compulsive too.

Skip to the swim.

Non-wetsuit and all the swimmers say hallelujah! Although I still didn’t have one of those fancy swim skins I was pretty stoked to be swimming unencumbered by neoprene. At the start I was at the mercy of hundreds of over-excited men (as per usual) who think they can hold 1:15s, but abruptly drop anchor about 4min into the swim. Consequently, I had an absolutely abysmal start as all these buffalo herded over me, only for me to have to pass them all after the first buoy. Once I had some clear water I started the chase, but kept it very comfortable. 24min out of a 3hr+ race is not much and as such one must budget energy requirements. I exited comfortably in second. 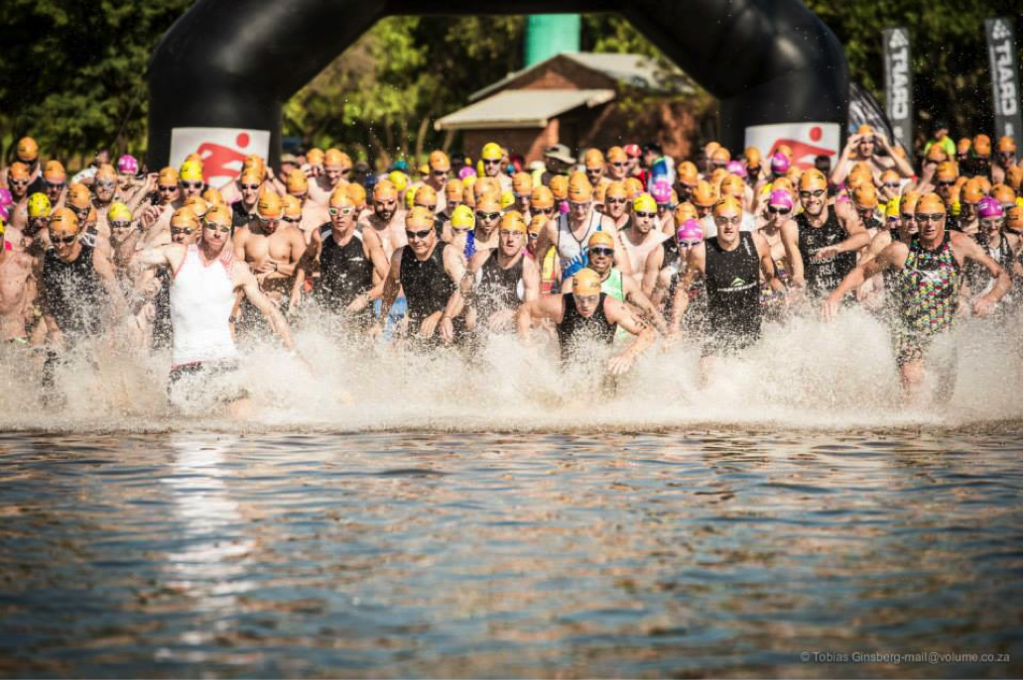 For the first time I put on long-finger MTB gloves for the cycle. No easy feat when your heart rate is 180+ and your hands are wet. But I will say that it gave me a bit of extra confidence. Out on the cycle thoughts that passed through my mind were “easy does it” and “don’t fall” as I tackled the first piece of rocky singletrack. “Phew, nailed it.” Kind of. I unclipped before I could fall.

Other things that worried me were that I might have taken my first gel too soon (only 10min into the bike), but we had come to some jeeptrack and I figured I should take the chance to down the gel while I could take a hand off the bars. I had no idea what was coming having never ridden the route before.

I also worried that Matt had applied enough sunblock. I really didn’t want to burn. 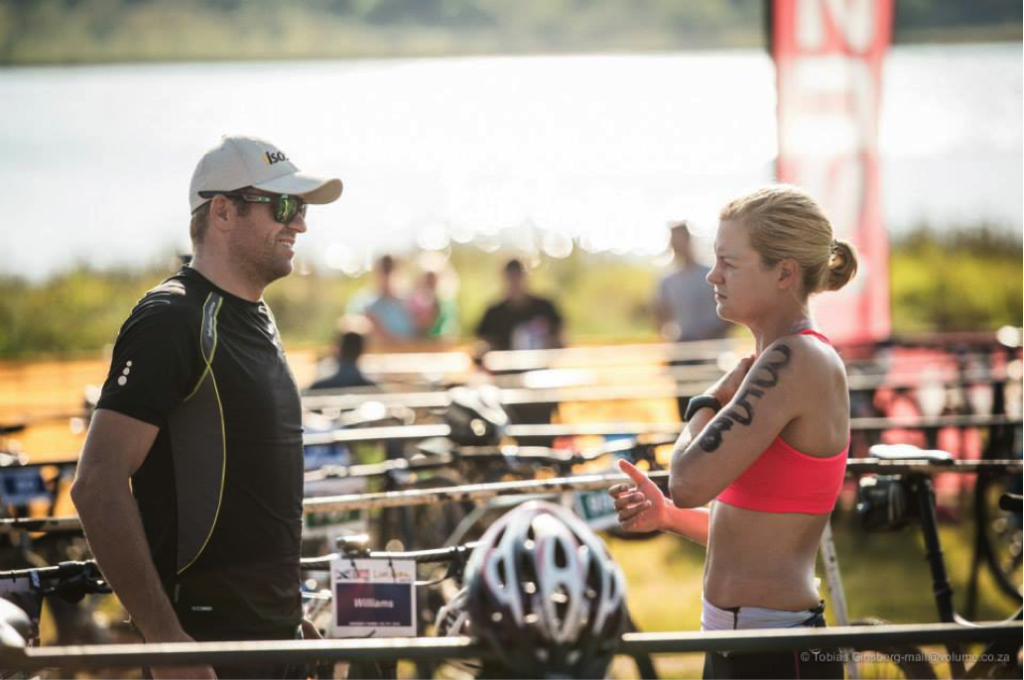 Matt and I discussing the best method of sunblock application, optimal SPF and time before submersion in water

The bike course was not quite as technical as I had feared and I was able to ride most of it. Okay fine. I fell once. I downed my second gel on my way into transition, deposited my White Stallion, pulled on my Hoka Huakas, poured the rest of my water over my head and grabbed the visor that I had found hidden behind the heater the previous evening.

The run was absolutely brutal. The hardest run that I’ve ever done. 12km in insane heat, at altitude, with 405m that needed to be ascended. We scrambled up dam walls, climbed concrete blocks, scaled metal ladders and negotiated a river bed comprised of boulders. But it was the 3.5km climb that got me. 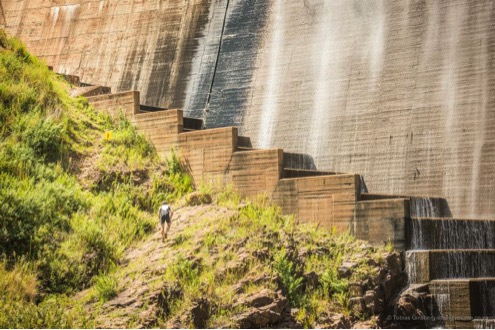 The yellow board with red arrow indicates the route

I tried not to look too far ahead. I didn’t want to see what was coming. My motto was “just keep plodding, plodding, plodding” sung to Dori’s little ditty and I had to employ a bit of a run/walk strategy. I quickly realised how much I gained on my competitors if I could keep on running just a bit further while they walked.

Halfway up the hill I saw a mirage of yellow. It was the defending champ, Carla. She had taken a wrong turn, run longer than she had to and was now smashed. Disbelievingly, I passed her. Just minutes before I had told myself it’s not over until it’s over. I was now in 4th spot.

Finally I crested the monster hill, but the descent provided little happiness. It was very steep and rocky causing me to brake at every footfall. Technical running is not my forte. At the bottom of the descent I looked back. Carla, a good technical runner, was closing the gap! I looked ahead and saw everyone walking up the next hill. I knew I had to run it if I was going to hold onto 4th. I kept on going and managed to stretch the gap a little and then I knew I had to give it everything to the finish. I was running scared and looking back, but it seemed as though that hill had made the difference.

I crossed the line absolutely trashed. 100% shattered. That run was a war of attrition. A war of pure survival.

A wet towel was draped around my shoulders and I staggered to a chair under the shade of the tent where I remained pretty much motionless for the good part of an hour. I was pretty stoked with 4th – my highest ever placing at an Xterra event.

The next day I felt as though I had been hit by a train. My entire body was in agony, including my sunburnt back. I was reminded just how tough Xterra events are.

An enormous thanks to Dave and the guys at PowerTap who hosted me in the days before the race. They are my longest standing sponsor and have been behind me through thick and thin. Sponsors like this are not easy to come by and I am so appreciative of all that they do for me.

They have just opened the most amazing indoor cycling training hub. If you want to do effective, safe, power training in Joburg then this is where you need to be. It’s in Rivonia, so if you’re in the area stop by and check it out. It almost makes me wish I lived in Joburg 😉 I’ll even make sure that they serve you your choice of cappuccino or espresso. 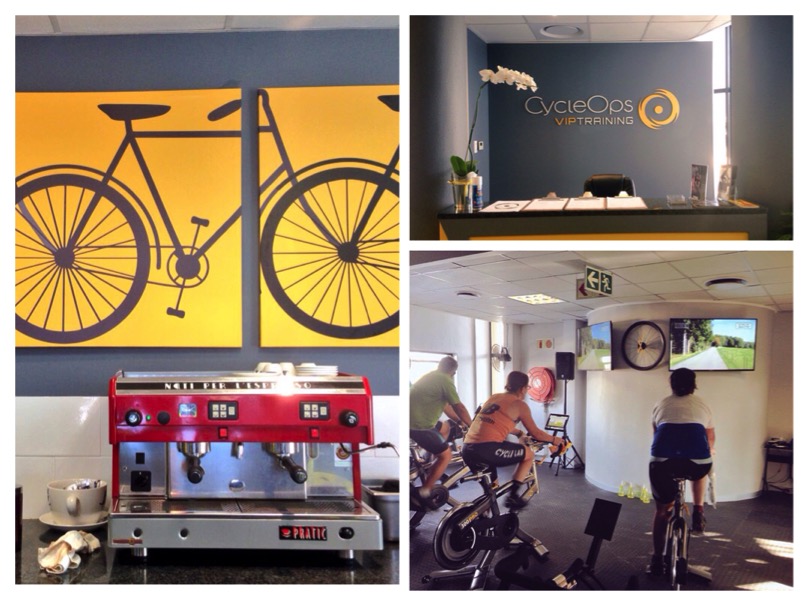 This was the first race that I did on my beautiful Specialized Epic. I am so stoked to be racing for Freewheel Cycology this year. Thank you Lionel and Richard for backing me! I usually go into a race just hoping that my equipment is going to hold up. It is amazing have a super awesome team of guys behind me, there to make racing easier. I’ll never again doubt that my equipment isn’t in tip-top condition. Their mechanics are top-notch. Richard and Ken – you rock.

Freewheel support women in sport. I think that’s something to cheer about.