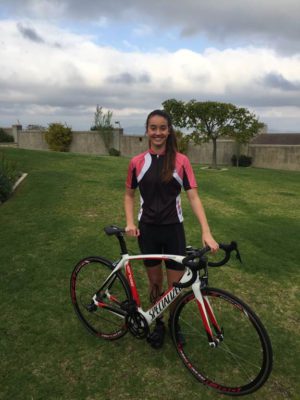 Kelly Vroon has eyes firmly set on Olympics in Tokyo

Born and raised Capetonian, Kelly Vroon (16), has joined Olympic International Footwear as a friend of the brand.

Kelly, who is a grade ten learner at Fairmont High School, is thrilled about joining the Olympic International team of friends: “It’s my first stint in this role and excites and motivates me. It’s such an honour to be recognised by a leading brand in sports apparel. I eat, sleep and live sport and will really enjoy the opportunity to promote them.”

Kelly would like to increase the profile and recognition of the brand within the sports industry. “I’m very involved with sports and sports people and would like to use the opportunity to give them as much exposure as possible. I plan to promote the Olympic brand through social media, my circle of friends and everyone I compete with in the various sports that I participate in.” Kelly participates in athletics, swimming, cross country, biathlete, biathlon, triathlon and cycling. She adds: “I’d like to be seen as an influencer and would like to grow in stature as one of their most significant friends through my sporting achievements and sportsmanship, both on and off the field.”

On what motivates her, Kelly comments: “I’m driven by the desire to succeed. All I want is to be the best athlete I can be and to show good sportsmanship.  I’ve set myself goals and I’ll do everything in my power to achieve them. Sport is what I love and I have many people supporting and motivating me. We’re a very sporty family and everyone motivates each other to be the best they can be. I also have many sports heroes that I see as my role models and seeing them compete in international competitions (especially the Olympics) motivates me because that’s where I want to be one day. My coaches really push and at the same time support me through both training and competition.”

The young athlete excels in more than just sports. She is also very strong academically. “Ever since I was a young child I’ve been competing in various sports and achieving my provincial and national colours. I’ve always been a top competitor in my age group and have won numerous medals. I also do very well academically, getting A aggregates for almost all my subjects.”

According to Kelly her biggest achievement thus far is coming third at the Biathle World championships in Batumi, Georgia in 2015. “I see this as my greatest achievement because I broke my ankle in November 2014. It was a great comeback for me to achieve a bronze medal at an international competition with many other competitors from all over the world, just 10 months after having ankle surgery. I was also a part of the South African girls’ team that took gold at this competition.”

In her free time Kelly enjoys shopping and spending time with friends and family. “I also love travelling and going to new places.”

The young athlete has many upcoming events that she will be participating in this year. “I have my biggest international competition coming up at the end of October which is the Biathle and Triathle World championships. I also have many local competitions this year like the South African short course swimming champs which took place at end of August, Western province long course champs in December, and many other swimming, biathlon and cycling league races.”

Among her other goals, Kelly’s goal for this year is to do well at the Biathle World Championships. “My ultimate goal is to represent my country at the Olympic Games one day. For now I have set smaller goals that will help me achieve my dream. My main goal is to do well at the Biathle world championships in Florida in October and I’d like to come top 5. I have also set some swimming goals for my two upcoming competitions this year. I’d really like to make the final at the South African short course swimming champs. This gala is an open gala, meaning I’ll be completing in an open age group, which makes it very competitive. My other goal is that I want to try and get some medals at the Western Province long course championships and make a qualifying time for the Senior National championships at this competition.” With regards to the Olympics in Tokyo, Kelly would really like to qualify for triathlon or swimming. “This is my biggest dream and I’ll do everything I can to achieve it. In the next 5 years, I’d like to represent my country in more international competitions.”